Every month we take a deep dive into the latest research in sports science. We start off by looking at research how accurate subjective feeling can be in quantifying training stress. Then we look at a variety of other topics concerning weight training such as pre-competition priming, isometric mid-thigh pull, foot strength, eccentric quasi-isometric resistance, and more. 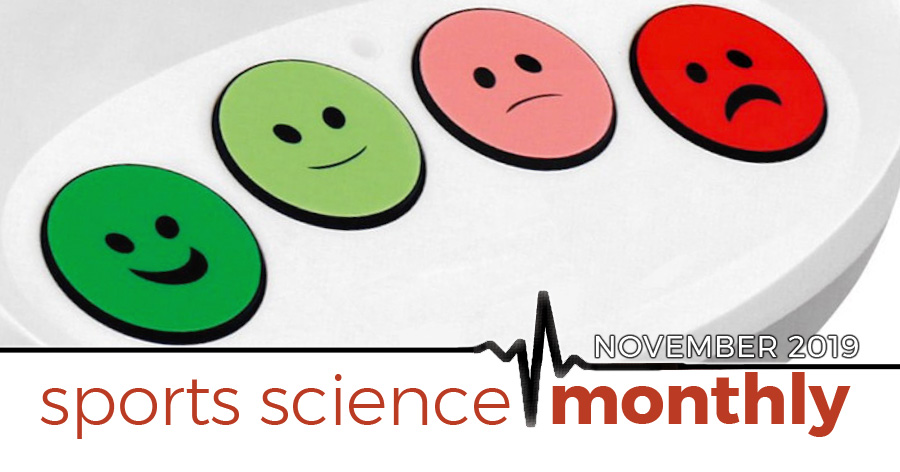 » Quick Summary: Athlete’s scores on a new “Feeling Scale” were correlated with their training performance, suggesting that a simple scale asking “how do you feel” may be an effective way of quantifying training stress in athletes.

Subjective markers, on the other hand, rely on the athlete self-reporting various outputs around how they feel. This can include Rating of Perceived Exertion. One issue with subjective load monitoring measures are that they have the potential to be influenced by the athlete’s memory or emotional state. For example, research tends to show that if you collect RPE immediately after a training session, the scores are typically reflective of the perceived difficulty of the last task the athlete undertook, and not the session as a whole. That said, the research suggests that subjective markers can be as accurate as more objective markers when these individual issues are either controlled for or mitigated (for example, collecting RPE ~20 minutes following the end of the session appears to overcome the “most recent exercise difficulty” bias).

This is good news, because subjective information around training load actually has the potential to be very useful. Subjective information tells us how hard the athlete actually found the session, which is arguably more useful than just the total work carried out within a given session. If an athlete finds a given workload easier than they did a month ago, then that’s a good sign of adaptation; if they found it harder, it suggests they are overly fatigued. Objective markers can also quantify internal workload—for example through the monitoring of heart rate via HR monitors—but this brings us on to an additional advantage of subjective markers; instead of needing equipment (which can be costly), you just need to ask your athlete questions.

This brings us on to the first study I’d like to explore this month, which is a pre-print of an article currently under peer-review. Pre-prints have not yet completed the peer-review process—so we don’t see the article in its final form—but they do allow us to see the research earlier. In this study, the researchers recruited 20 participants, equally split between males and females. The subjects were all reasonably well resistance trained, with inclusion criteria of 1.2 times bodyweight performance in the bench press and squat for men, and 0.7 and 1 times bodyweight for women. The participants underwent four testing sessions, separated by a maximum of eight and a minimum of three days between. The first session was a 1RM testing session on both the bench press and squat. The second, third, and fourth sessions were three sets to failure at either 70% squat 1RM, 80% squat 1RM, or 70% bench press 1RM. These latter three sessions occurred in a randomized order.

The purpose of the study was to explore the use of the Feeling Scale in training monitoring practice. The Feeling Scale is an 11-point scale, ranging from +5 (very good) to -5 (very bad), in which users score themselves around how they’re feeling in terms of pleasure and displeasure. The Feeling Scale might, therefore, be useful in understanding when issues such as burnout and/or overtraining are beginning the manifest, allowing the coach to make any changes that may be required. Furthermore, there is the potential that athletes might be able to self-limit their training workload and/or intensity around a prescribed score of the Feeling Scale; for example, if the coach states that a given session should be a +2, then the athlete may be able to self-select the set and rep combination to deliver that. As such, in this particular study, Feeling Scale scores were collected after each set, with the participants scoring each individual repetition. Fatigue was also determined through the subjective Rating of Fatigue scale, and effort was measured via RPE. Bar velocity was also calculated for each lift.

The results demonstrated that an athlete’s score on the Feeling Scale predicted their bar velocity, with more positive feelings associated with a higher overall velocity. In the bench press exercise, for example, every unit of decrease in score on the Feeling Scale corresponded to being 13.5% closer to failure, and a 10.3% decrease in bar velocity.

This suggests that individual feelings of enjoyment, captured via the Feeling Scale, are associated with effort and performance during exercise. As such, the use of the Feeling Scale by coaches to quantify training load represents a potentially useful option, given its low cost when compared to other, more well-established, technologies. This is particularly true within training sessions, where scores on this scale are associated with increased fatigue and reduced performance. As always, this is a powerful message; we don’t need expensive or complex equipment to understand training load in our athletes – sometimes we just need to ask them how they feel.