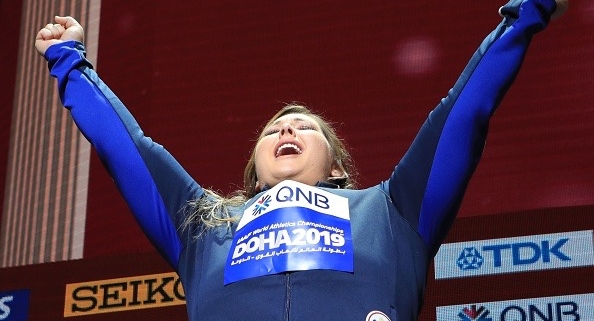 Yesterday we released our men’s world rankings. Today it’s time for our women’s rankings. For the first time since 2012, Anita Wlodarczyk is not the top ranked athlete. It was a changing of the guard this year and our complete women’s hammer throw rankings are below.

It would be easy to say that Price was ranked first since Wlodarczyk had injury issues. But it is not that straightforward. In reality, DeAnna Price knocked Wlodarczyk off of her throne this year and earned the rank on her own. She beat Wlodarczyk in their only head-t0-head meeting this year and threw nearly as far as Wlodarczyk did last year to
rank first. As Wlodarczyk is getting older, it is not a safe bet to say that a healthy recovery will be enough for her to beat Price next year. Historically American women have fallen off their form at major championships, but Price’s win shows what is possible. It marks the first ever World Championship throwing gold for an American woman, and the first global hammer throw gold by any American since 1956.

Zheng was the only athlete to have a winning record against Price this year. They faced off three times, with Wang winning twice. She also won three Hammer Challenge competitions. But she finished three meters behind Price in Doha, which solidified Price’s position in first.

Berry tends to go big or go home. After a coaching change last year, she showed a new level of consistency in 2019. She claimed a win at the Pan American Games, a season’s best at the US championships, and even qualified for the finals in Doha. But three fouls in the finals meant that was the end of her journey for the year. Compared to her closest competitors she fared well: 4 wins in 5 competitions agains Fiodorow, 2 of 3 against Tavernier, and she was one of just two athletes to hand Price a loss this year.

Even without Wlodarzck in Doha, Poland took home a medal thanks to Fiodorow. Typically major championship performance is my determining factor, and Fiodorow did not disappoint there. She threw a personal best to claim silver. But what hurt her was simply the performance level. Take out the Doha result and Fiodorow averaged just 72.55 meters across her other meets, nearly two meters off of her closest competitors.

Tavernier maintainer her rank from last year. While she did not claim any global medals, she competed well on the circuit, placing 5th or higher at every meet except the World Championships.

How do you rank half a season? Wlodarczyk called her season short for knee surgery in July. In total, she competed just three times and missed the biggest meets of the year. She still won a Hammer Challenge meet and was on the podium in two more. But the world record holder was a shadow of herself and it’s hard to justify a higher ranking without a longer resume.

Petrivskaya only competed about one a month this year, but posted strong and consistent results, culminating in a fourth place finish at the World Championships.

nlike Petrivskaya, Kylmets racked up some big meets results by winning the World University Games and having a strong showing at the European Team Championships. However Petrivskaya got the edge as she finished higher at the World Championships and her average result throughout the season was also higher.

Andersen jumped onto the international scene last year, and climbed even higher this year. She made her first World Championship team, although failed to reach the finals. But she had strong showings at the Pan American Games and other international meets. Combined with the second best mark in the world this year, that helps her make her rankings debut. She is also the youngest athlete on this year’s rankings at age 24.

The final spot on the rankings is always a tough one, with many athletes close to making the cut. A half dozen athletes were in consideration this year. In the end, Luo edged out Hanna Malyshik (BLR) thanks to a strong showing at the World Championships and Asian Championships.