Every month we take a deep dive into the latest research in sports science. This month we start off by looking at research on the performance stages of competition, then look at performance in the heat, genetic test, as well as injury topics related to sleep and hamstrings. 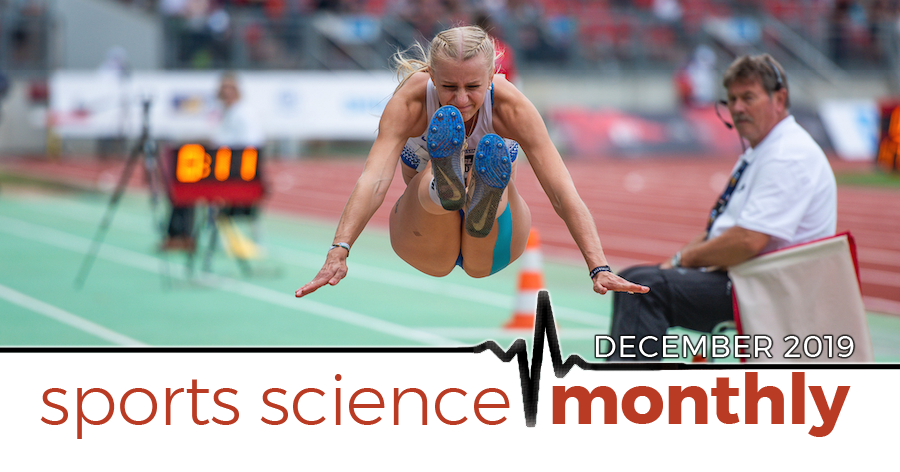 » Quick Summary: A long jump competition can be thought of as having three distinct performance stages; understanding these stages enables us to better design training sessions in order to prepare our athletes.

In a recent article, I wrote about how we can design more representative training sessions by better understanding what happens in a competition. Within this article, I was heavily influenced by research from Chris McCosker, who reported how a long jump competition can essentially be viewed as a series of related activities, with performance in each jump influenced by the previous jumps outcome, and also influencing future jumps. I found this work really interesting, as it was a fresh way of looking at things. McCosker and his colleagues have another article out which promises to be equally influential. Here, the authors recruited six elite male long jump coaches from the UK, Australia, and Brazil to a series of interviews. The coaches all had a minimum of ten years’ coaching experience, and in most cases had coached a major championships long jump medallist. The interviews were structured so as to be able to best understand the coaches perspectives on what influenced long jump performance within competitions.

The coaches all believed that, during a performance, any single jump had one of two goals; either a jump for maximal distance, or a sub-maximal jump (primarily to avoid a foul). The three main conceptual themes that emerged from the interviews were “perform, respond, and manage.”

The coaches stated that this stage of performance was primarily related to the point at which the athlete was self-regulating their performance; in essence, the athletes were free to “write their own story” in terms of the goal of the jump. This occurred most commonly in the first round of the competition, in which athletes were aiming to have their best jump, in order to exert some pressure on their competitors. There was an additional theme that a good performance in round one provided further freedom in the subsequent rounds in which to optimally perform. A good early jump provides confidence to the athlete, and, if it isn’t a foul, freedom to increase effort and take greater risks in the later rounds. Because all of the jumps within the competition are linked, a good round one jump from one athlete also increases the pressure on other athletes, reducing their ability to stay in the “perform” zone.

In this stage, the athlete needs to have the required skills to manage the performance scenario in which they find themselves, which can often be a challenging situation. For example, perhaps the athlete finds themselves in round three with two fouls, needing a legal, and decent, jump to stay in the competition. Other scenarios that need managing are the conditions—the athlete has to stay attenuated to the wind speed, for example—or the crowd, with the athlete controlling their rhythmic clapping.

If we bring this together, we can see that elite long jump coaches believe there are three distinct performance stages within a long jump competition; perform; respond; manage. These are linked—the perform stage tends to occur with little external “pressure” (e.g. previous foul, competitor jumping far); respond tends to occur in response to a previous performance outcome—either the jumpers own or a competitor—whilst manage occurs when an athlete is attempting to control performance-limiting circumstances, just as injury, under-performance, or environmental conditions. Within a competition, an athlete may start in the perform stage prior to their first-round jump; however, immediately prior to this jump, their main competitor jumps a large distance. The athlete now potentially shifts into respond, having to, as the name suggests, respond to their competitor’s jump. If they then foul, then foul again, they shift into the manage performance stage, needing to manage and control their round three performance so as to achieve a legal jump to remain in the competition.

A big take home here is that we need to prepare athletes for these stages through task-representative training practices. Athletes need training in the respond and manage stages of a competition, and not just the perform stage, as is normal. The use of different scenarios within training will allow this, as will exposure to different levels of competition. The paper authors give the following excellent training design examples:

Overall, another really useful paper from these researchers, enabling us to better understand the constituents of performance, and how to best prepare for them. I’m really interested to see whether these findings and concepts are explored in other events, and perhaps even other sports, to see if there are commonalities between them.