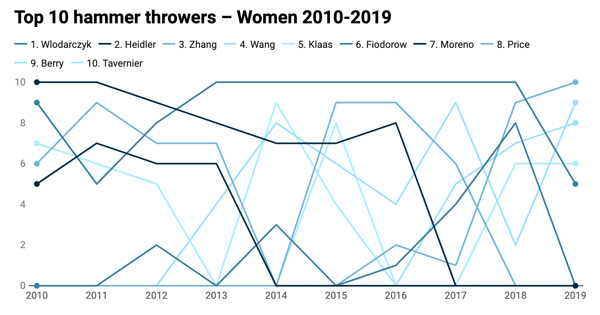 To create our rankings we simply compiled the results of our annual hammer throw rankings for the last ten years and gave points for each placing. Each place was given points: first place was given 10 points, all the way down to one point for 10th place. Tiebreakers were given to the athlete that had reached the highest ranked best season. Remaining tiebreakers were give to the athlete who was first appeared in the rankings in the earliest year. Complete past rankings can be viewed here: 2019, 2018, 2017, 2016, 2015, 2014, 2013, 2012, and 2011.

For banned athletes that retroactively had results disqualified, we removed any points they had for relevant years. For example Tatyana Lysenko had he points for 2012 and 2013 taken away in the rankings below. All athletes affected were noted with an *.

Women’s hammer throw in the 2010s was synonymous with one name: Anita Wlodarczyk. Betty Heidler entered the decade as world record holder, but Wlodarczyk set four records, became the first ever to break 80 meters (which she did 7 times), won two Olympic golds, three world titles, and on and on and on. To put her dominance in perspective, she had 24 of the top 25 performances of the entire decade at at one point had a winning streak lasting more than 3 years and 42 competitions. It is hard to imagine an athlete in any event as dominant as Wlodaczyk was.

On the darker side of things, the decade was also a decade of doping. As retests became more common 24% of the athletes in our ranking served doping bans. Most notably 2012 Olympic champion Tatyana Lysenko and 2008 champion Oksana Menkova were both snagged by retests and had their medals stripped.