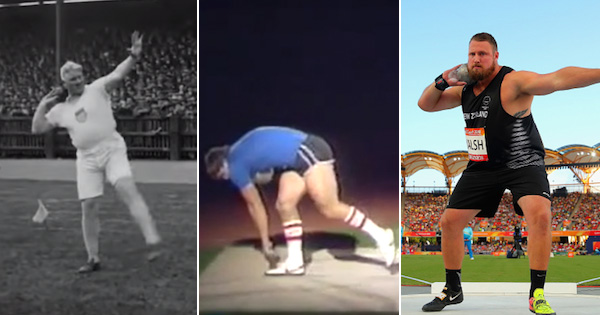 When we look at track and field, technique in different events have evolved at different paces over the course of the last century. Comparing different events it is interesting to see how some techniques have barely changed while others have become unrecognizable. All of this begs the question why some events move forward technically, and others do not.

The spectrum of change

Some events, like the 100 meters, have changed little. We understand a lot more about sprint mechanics now due to the work of Dr. Peter Weyand and countless other researchers out there. We also know a lot more about training. Changes in track surfaces have also altered the demands of the start and acceleration phases. But watch Jesse Owens run and even modern day sprinters can learn a thing or two.

My event, the hammer throw, has seen moderate change. The even more or less looks the same, but the entire concept has changed from pulling to pushing the hammer, as well as changes in footwork that evolved from new throwing surfaces.

The shot put, on the other hand, is unrecognizable. A century ago shot putters would shuffle across the ring. In the 1950s American shot putter Parry O’Brien change things up by starting out facing opposite the throwing direction and gliding backwards during the throw. The Eastern bloc then perfected this technique, but in parallel a radically new technique emerged: the spin, where discus throw technique was adapted to the smaller shot put circle. Now over the last decade variations of the spin technique have emerged, which we discussed with coach Don Babbitt HMMR Podcast Episode 170. Just look at the development:

The drivers of change

In talking with friend Dale Stevenson recently we tried to break down why technique can progress so drastically in one event, but not another. In the hammer throw, one could even argue technique has regressed. He highlighted four key points he sees, and I added one more last point;

» Related content: Dale Stevenson talks about planning and peaking with Tom Walsh on the HMMR Podcast.

Why the shot put has reinvented itself

When you apply these points to different events, you start to see why the shot put has jumped ahead in terms of technical innovation. Prize money and popularity of the shot put have jumped over the last few decades, adding a more competitive environment for innovation. There is also precedent: in the span of one generation the men’s shot put shifted from predominantly glide to now almost exclusively rotation. Shot putters are used to change, and willing to accept further change. If anything, they are more afraid of stagnancy than change. There is increased diversity: the 1976 Olympic finals featured 3 Americans and 9 Europeans. In 2016 had finalists from America, the Caribbean, South America, Africa, Europe, and Oceania. The retirement of coaching legends like Art Venegas and Anatoliy Bondarchuk have also opened the doors for their students. And the shot put is complex enough that it offers lots of room for improvements and new ideas.

The hammer, on the other hand, has seen decreased competitions and competitiveness recently, and environment less open to change. Diversity has increased and coaching legends are retiring, but the new generation has yet to capitalize on that. The 100m definitely brings competitive pressure to the table, but this is where the last point comes in. Running is a very natural movement and it is hard to improve on nature. But find the right mix of elements and change is almost inevitable.