On a recent trip back to the UK, I got to watch my one-year-old niece play with Luis, my sister’s dog. My niece was fascinated by Luis, and wanted nothing more than to play with him, as well as give him a healthy dose of stroking. Watching her trying to do this was interesting; whilst she had the motivation to do so, she lacked the ability to do it well. Luis is a hyperactive dog (my sister prefers the phrase “energetic”), and is forever bounding around; as such, whenever my niece would go to stroke him, she would invariably miss him. Even when Luis was still, my niece struggled to stroke him in what I would call a “normal” fashion; instead of a long, smooth stroke along his coat, she would instead “pat” him, in a somewhat uncoordinated manner.

Compare this to how most adults are able to stroke dogs. If the dog is hyperactive (or “energetic”), then we can still make contact with the dog because we are able to predict where the dog will move to, and then ensure our hand is in the right position to do so. Whilst my niece struggles to stroke Luis in a coordinated manner that simultaneously requires all of her concentration, I can stroke him under the table whilst playing cards and holding a conversation, and I can do so in a very smooth—i.e. normal looking—fashion.

I tell you this story not to boast about my prowess over a toddler, but to introduce a recent paper, authored by John Kiely, myself, and Dave Collins. In it, we explore the concept of “smoothness,” how this might influence running proficiency, and whether this matters. Smoothness is hard to define; essentially, we know it when we see it, but we can’t necessarily say what it is. In essence, a smooth movement is one that has minimal amounts of jerk, defined formally as the rate of change in acceleration; it occurs in a continuous, coordinated action, appearing fluid. In terms of running, whilst we might struggle to describe what smooth running is, if we watched a video of different running styles, we’d all likely be able to identify smooth and non-smooth runners. In effect, even though we can’t always articulate what smooth movement is, humans seem intuitively tuned to detect movement smoothness. 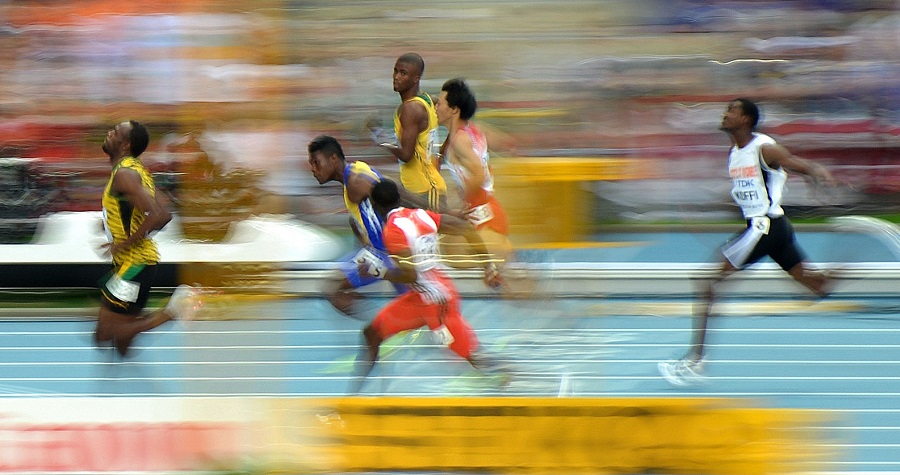 Movement smoothness universally increases as we move from childhood into adulthood—which is why I’m better at stroking dogs than my niece—but also with experience. The more time we spend carrying out a task, the smoother our actions become when performing it. A loss of smoothness is associated with a loss of function as we age, or with diseases such as Parkinson’s, suggesting that smoothness is an important characteristic of effective movement—although we’re not sure entirely sure why. Whilst it might be tempting to think that smooth movement is efficient—and it likely is—it’s not necessarily the most efficient way to perform a given movement. Straight leg running is highly efficient in terms of energy cost, but it is not at all smooth; it’s impractical, and excessively mechanically stressful. Instead, smooth movement is highly proficient, allowing us to solve multiple demands.

The importance of being smooth

It appears that smooth movement evolved through the body’s desire to move in a manner that reduced “surprise”—unexpected movement perturbations—allowing for greater consistency within the movement, and requiring fewer ongoing adjustments. When I sprint in a smooth manner, my stride length remains within a fairly tight bandwidth; as such, my nervous system knows roughly how long I’ll spend in the air during each stride, where I’ll contact the ground, and how much force will be required upon ground contact. My nervous system can then “predict” how much force and stiffness is required upon the next ground contact, and which postural positions are required. Non-smooth sprinting, on the other hand, would lead to large variations in stride length, and therefore uncertainty within my CNS. In turn, this could lead to excessive stiffness around my joints, increasing the metabolic cost and mechanical stress, thus harming my performance. This can also be cognitively costly, illustrated by my previous example; I can stroke Luis, play cards, and hold a conversation at the same time, whilst my niece requires all of her attentional ability to merely make contact with him.

Smoothness is an outcome of proficient coordination, making it very important within sporting contexts. Highly skilled athletes appear to carry out movements with increased smoothness relative to novices and lesser skilled athletes, for example, and this holds true for runners. A lack of movement smoothness appears to increase the risk of injury. Increased levels of fatigue also appear to reduce smoothness. As such, the monitoring of smoothness within activities could be useful, giving us a sense of skill learning (i.e. has the athlete’s ability to perform the required movement in a smooth nature increased), injury risk, and fatigue during training. All of the facets are no doubt useful, and could acutely enhance the provision of training and the development of elite performance. However, as of yet, and despite the evidence of the importance of smoothness, there is very little research on the quantification of smoothness to inform these areas. This is somewhat surprising, given that jerk can be accurately quantified by wearable technologies such as accelerometers, but might well be something that develops in the future – which, given its potential promise, could be hugely interesting. This could especially be true in the return-to-play following an injury; as injury decreases movement smoothness, a return to baseline movement smoothness may be a useful way of quantifying whether the athlete is fully healed.

Finally, how do we develop movement smoothness? The simplest way is just to carry out a movement a number of times, under a variety of different conditions. I used to have a dog, so I’m used to stroking them across a variety of positions, whilst my niece is rarely exposed to dogs, so has yet to build up that movement library. When it comes to running, John Kiely has previously written about how modifying the constraints of running practice is important, and it appears likely that these guidelines of variety would enhance running smoothness. Additionally, enhancing the resilience of the key tissues involved in the movement would likely enhance the capacity to maintain smoothness during periods of acute fatigue (such as in a marathon) or muscle damage (such as in a resistance training session) – underpinning the importance of conditioning to sports performance.

Bringing this all together, it’s clear that smoothness is a crucial component of effective expert performance, and yet it is currently both poorly understood and quantified. As research in this area grows, monitoring of movement smoothness may prove very useful. If this subject is of interest, I’d strongly recommend reading through the underpinning research paper, which is open access and freely available, as well as some of John’s previous papers on the subject.