Agility training is often perceived to be conducted in two dimensions. Whether programmed, random, game or task orientated, it usually consists of change of directions on a left –right and forward –backward continuum. Yet movement rarely takes place in just two dimensions: subtle and not so subtle changes of height and depth also take place. A boxer bobbing and weaving or a gymnast doing a double front somersault both have to move their centre of gravity up and down as well as sideways and forwards respectively.

In this article I shall attempt to highlight further examples from different sports and offer some advice on transitioning between levels in the third dimension.

» Related content: Frans Bosch explains the attractors of agility in his new book Anatomy of Agility available for preorder in the HMMR Store

In my recent article on the categorization of movement I described Laban’s framework and how it can be adapted to sport. Laban talks about the area the body is working in and where it moves, including the pathways it follows and level of play. This framework gives us a common language from which to work.

The use of pathways, whether they are linear, curved or zig-zagged, occurs in every sport. The wide receiver route tree in American Football is a clear example of this. It contains multiple pathways such as streaks (linear), flares (curved) and post (zig-zag) routes.

The changing of levels (high, medium and low) also occurs in almost every sport. For example, volleyball players dive for a dig (low), block at the net (high) and move around the court (medium). The definitions are:

Coaches often recognize these different levels of play, but neglect the transition which can be critical. For example, Mixed Martial Arts (MMA) training can sometimes be planned according to ‘Stand-Up’ and ‘Groundwork.’ Fighters train both on their feet and on the ground, which is key. But even more important is the transition from one to the other, and perhaps back again. The fighter goes from medium level to low level, their feet move along one pathway, whilst their upper body and head may lead or follow a different path. This must be done with feints and avoiding getting hit because the opponent is rarely stationary. 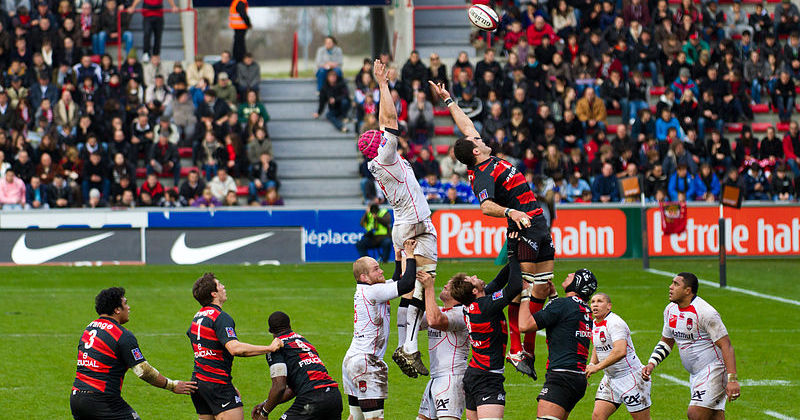 The rugby union lineout results in a very high level catch but it is preceded by a co-ordinated movement on the medium level with at least two other team mates. What used to be a straight out up-down jumping competition between two opponents has now become a complex movement pattern involving feints, mis-directions and curved and linear pathways at the medium level.

The ability to get up on your feet and back into the game quickly is another important part of playing rugby. Rugby coaches are adept at teaching tackle technique to make it more effective but what happens after the tackle? I would suggest that forwards need to be agile in the line out and from the floor and their training should reflect that.

Sometimes the transition between levels is more rapid such as the dive for a ball in cricket and a return to the medium level before throwing. Goalkeepers in all sports have to work between the levels and transition smoothly between. Coaches with this position group may be the most aware of the need to plan up and down as well as side to side.

Once you have identified the different levels that operate within your sport, then you can start to plan how to train at those levels and switch smoothly between them. Effective transitions involve body management. An athlete’s ability to manage their body should not be assumed. Instead it should be coached and developed. The focus should be on the three key elements of body management:

One of the simplest ways to develop body management is to get your players moving at the low level at some point in training instead of the medium level. This figure of 8 drill is one of a series that I used to help a football goalkeeper become more comfortable and resilient with working on the floor:

The loading of the hands, wrists and shoulders is a conditioning element too so I would suggest starting short and simple and then build up.

Returning to cricket, fielding throwing, and catching progressions using games are commonplace but the coaching of side rolls is uncommon. Cricket outfield surfaces are hard and players can get hurt if they dive outstretched without being able to roll and dissipate the impact safely. The ability to catch at low levels requires mobility and practice and can be developed in the warm ups as shown below:

Alongside a sets/reps/type progressions I use apparatus to encourage (or force) players to adapt and move at different levels. A skipping rope is cheap and easy to obtain. If one player holds an end high, and another low, the other player (s) can progress up/down the rope moving side to side using whatever agility method you like. Boxers can weave side to side and hockey players can dribble the ball around cones. The constraint of the rope height allows them to get used to that gradual transition from high to low. This saves a lot of coaching breath when working with the hockey players who like to bend from the waist rather than sink their hips to a low level and look upright.

Agility is fluid and dynamic and often requires subtle variations in height as well as the big ‘steps’ or ‘cuts’ that leave a defender grasping air. By getting players more comfortable at working at low levels the coach can then work on transitions between levels. Players who can do this effectively and efficiently are less likely to get injured and are more useful to the team as they are ‘out of action’ for less time.