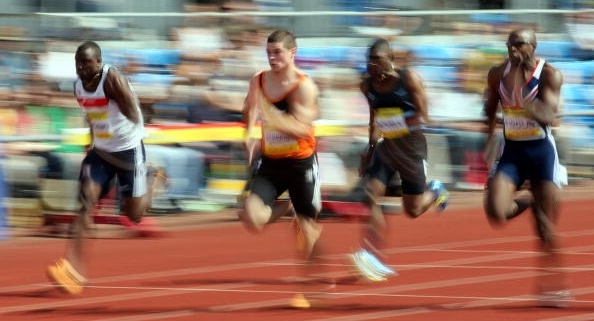 Just like performance itself, performance health is multi-faceted. Each part of the series will be looking at a different contributing factor, such as:

To kick off the series I want to share a look at my own injury history and how it is unfortunately all too common. My story represents something many athletes go through; we tend to get injured, quite frequently, and often at very inopportune times (although, of course, there is never really a good time to get injured).

My story of injuries

My own career had some infrequent periods of success, interspaced with periods of disappointment and injury. Whilst some of this happened in the public eye, much of it did not.

My first year in athletics, 2001, was undoubtedly a success, and culminated in me winning the National under-15 Championships in a slightly wind-assisted 11.00, making me the second fastest under-15 in British history at the time. However, earlier that year I was plagued by a back injury—written off as growing pains—which severely hampered me for the early part of the season. In 2002, I managed to win the English Schools 100m Championships, and competed internationally for the first time—but, having pulled my hamstring in the heats of the English Schools, I was far below my best. That hamstring injury continued on through the rest of the season, and I could only manage three sprint sessions prior that year’s under-17 National Championships. In 2003, I came third at the World Under-18 Championships, running a personal best of 10.53 in the heats, and yet I missed a large chunk of the competitive season immediately prior to these Championships with another hamstring injury.

In 2005, I won the European under-20 Championships and ran a personal best of 10.22 seconds, and even got called up to. the 4x100m relay squad for that year’s senior World Championships in Helsinki. On the surface, 2005 was a success, but from December until March that year my back was in such bad shape that I couldn’t really train, and, as a result, I had to miss the majority of the indoor season, and it wasn’t until early May that I thought I’d be able to compete outdoors. During the best season of my career, 2007, I ran my personal bests (6.55 and 10.14), won a European Indoor and European Under-23 Silver medal, and made the semi-finals of the World Championships in the 100m. But, again, back injuries severely hampered my performance; I was suffering recurring back spasms that prevented me from doing any block starts—at all—from the start of July until the World Championships at the start of September. It’s very hard to compete at your best and do yourself justice when you can’t practice a crucial component of your race, even in warm-up.

During the 2008 indoor season, after winning an important grand prix in Stuttgart (and beating that year’s World Indoor Champion), I got norovirus, and then as I was recovering from that I suffered a complicated and very painful hamstring injury which meant I missed 8 weeks of running from February to April. Then, in my first competitive race of the outdoor season, I injured it again, just 5 weeks before the Olympic trials. In a race against time, I managed to secure both the qualifying time and my spot on the team at those trials—right at the last minute—and went on to compete in the 100m at the Olympic Games, but, yet again, my performance was severely affected by injury during my preparation and competition period.

In 2010, I was diagnosed with Unexplained Underperformance Syndrome (UUPS), which, as a diagnosis of exclusion, is a frustrating process to go through. Looking back now, I believe that I wasn’t consuming enough energy to support my training, and so, as a result, was just chronically under-recovered and unable to train with any intensity. In 2011, whilst warming up for a set of deadlifts, I injured my back quite severely, which resulted in me missing 7 weeks of running from the start of March to the end of April, and, since that day, I haven’t lifted any weight off the floor (i.e. power clean, snatch, deadlift), or squatted more than 120kg – which, in an event where strength is an important component, is very performance limiting.

In 2012, I needed surgery to repair the disc I injured in 2011, which caused me to miss the 2012 Olympics, and further narrowed the variety of exercises I could undertake in training. When I moved into bobsleigh, whenever I travelled with the team, I was unable to do any real training—all we had was an Olympic bar, which was essentially useless to me—which meant I struggled to maintain certain training adaptations during the competition season. Finally, in 2014, having qualified for the Winter Olympics, I suffered a career-ending back injury—essentially, the same as in 2012 but on a couple of different discs—and that was it.

The data on injuries

It’s exhausting writing that, because, ultimately when I look back on my career, I sometimes see it as a massive waste of potential. The injury that caused me to retire had its roots in an injury I first had when I was 14, and gradually degraded my ability to tolerate the required training loads, and training variation, to perform at the highest level. This isn’t unique to me; if you think about many of the top athletes, either nationally or globally, you can see how they typically suffer the same, or similar, injuries during their career—and in many cases, the root causes of these injuries will have been laid down many years before.

Injuries, therefore, are obviously bad news. In a 2017 systematic review, researchers from the Australian Institute of Sport reported that a lower athlete availability (in this case, availability refers to being able to complete full training and competition) was associated with a failure to achieve performance goals. Furthermore, injuries that occur close to, and during, competition are associated with a failure to achieve performance goals. From a track and field specific perspective, a couple of the same researchers reported that, in a cohort of 33 elite athletes across 5 seasons, the likelihood of them achieving their performance goal was increased by a factor of seven if they were able to complete—unmodified—80% or more of their planned training weeks.

This doesn’t just apply to senior and elite athletes. In a 2013 paper, examining youth athletes in New South Wales, Australia, the authors reported that almost 80% of these developing athletes suffered at least one injury that cost them at least three weeks of training time at key points of their development. The vast majority of these injuries, over 75%, were classified as overuse injuries, and, more worryingly, just under 20% of these athletes retired prior to the age of 18 because of these injuries. These demonstrates how injuries in developing athletes can ruin potential, and lead to life-long drop out from sport, potentially affecting the health of the person later in life.

Finally, injury is not the only factor that robs athletes of their potential; so too can illness. In a study of Australian athletes in the run up to the 2016 Olympic Games, it was found that all of them (!) had at least one episode of illness in the three months immediately prior to the games. Imagine spending all your life training for the opportunity to compete at the Olympic Games, only to have your performance compromised at the last minute because of illness.

All of the above outlines why I’m interested in the topic of performance health. Being able to increase an athlete’s availability to train and compete at the required levels to support elite performance can unlock new levels of success. This last bit is important; it’s easy to reduce the rate of injury in athletes – you can just stop them from training. What we need is a balance between risk mitigation, health support, and sufficient training intensity and volume to deliver performance goals.