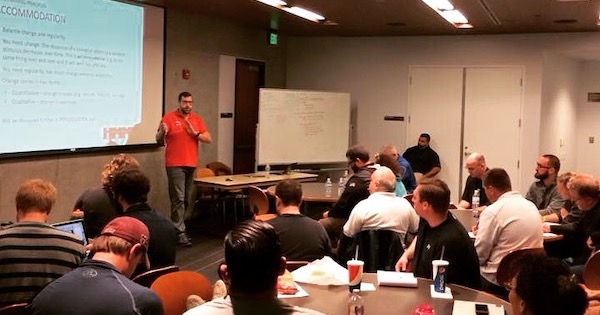 Behind every successful athlete is a coach. Whilst we typically have a good idea of what goes into developing an elite athlete, we tend to pay much less attention to how elite coaches develop. This is obviously a gap in our thinking; if we want to have successful athletes, and to sustain the success of those athletes, then we need an army of coaches with the ability to develop and support them. As a coach reading this, you might be thinking about how you can best develop, and what situations can you engineer for yourself to best drive your development. Fortunately, there is plenty of research to guide us.

Back in 2014, Steven Rynne and Cliff Mallet of the University of Queensland published a paper where they reported the results of a study they conducted on the topic. In the study they interviewed 44 coaches from a variety of sports throughout Australia. All the coaches worked full time within their respective high performance sport environments, and were involved in directly preparing athletes to compete at international events. Through interviews with the coaches, Rynne and Mallet identified some key situations in which High Performance coaches learned and developed, providing valuable insight for coaches looking to drive their own development.

Learning situation 1: On the job experience

Simply put, you can learn to coach by coaching. The coaches identified that much of their development came through actual hands on coaching, and was driven primarily through trial and error. As such, it’s clear that, if you want to grow as a coach, it makes sense to increase your coaching experience, and attempt to coach across a range of domains and experiences. Being open to new experiences and ideas, and trialing these in your practice, also appears to be important in driving development. One issue identified by this cohort of Australian coaches is that, often, there is a coaching hierarchy, which can limit the coaching variety, tasks, and exposure of junior and developing coaches; if you’re a senior coach, it’s potentially worth being aware of this and attempting to provide a greater breadth of hands-on coaching experience to your assistants. The risk here, identified by some of the coaches, is that coaches can take on too much; coaches, like athletes, need to prioritise their own health and performance in order to avoid burning out.

Learning situation 2: Discussions with others

The coaches in this study identified that they gained a massive benefit from discussing coaching, and coaching science and practice, with a variety of other people. This included other coaches, both from within their own sport and others, as well as support staff such as strength and conditioning coaches, sports scientists, and sports psychologists. These conversations were largely informal and unstructured, which potentially demonstrates the importance of having a large network, being exposed to different people, and being open to approach new people and get new ideas. Some coaches identified that the value from these conversations was that it challenged their beliefs and thinking and spurred development. The clear take-home here is that cultivating networks and speaking to other coaches and people involved in sport, in an informal network, is an important pillar of coach development.

Learning situation 3: Experience as an athlete

This point is going to be somewhat controversial, given many debates I see on social media, but a large number of the interviewed coaches identified that their experiences as an athlete were an important source of learning in their careers, especially early on. Feedback was often along the lines of “I’m trying to just sort of replicate from what I know I felt a good coach should do.”

The benefits here are clear; as an athlete, you can be exposed to the ideas and techniques of an established and experienced coach, which can “shortcut” your learning in key areas. This can be technical in nature, but also around typically softer skills, such as how to communicate with, and support, athletes. For example (and I’m not a coach) during my sporting career I was directly coached by people who had won multiple Olympic and World Championships medals across a variety of events and sports, giving me insight into what successful coaches should (and shouldn’t!) do.

However, it’s not clear that you have to have been an elite athlete to gain this experience; non-elite athletes can also experience different coaching techniques and styles during their own careers, especially if they take part in multiple sports. It might also be possible to manufacture these experiences; author of The Pressure Principle and elite skills coach Dave Alred has previously discussed how he likes to try different sports as a way to experience what it’s like to have to learn something new, giving him empathy with the athletes he works with, and discovering new ways to drive their development.

On average, the coaches in this study had undertaken around 400 hours of formal training in coaching, primarily through coach accreditation and certification programs. Many of the coaches recognized that, whilst formal coach education played a role in their development of technical skills, their exposure to other coaches, along with their on the job experience, helped to develop them into high performance coaches. As such, it’s clear that formal coach education has a role to play in coach development, but that coaches should also take ownership of their own education and seek out a variety of other experiences and opportunities.

In addition, just under 65% of the interviewed coaches had undertaken tertiary education, but in many cases this education was in non-sport related fields. Those coaches who did follow coaching-related tertiary education regarded it of upmost importance to their coaching practice, demonstrating its potential use a method of developing coaching skills. Tertiary education was reported to increase the coaches feelings of competence and self-efficacy, as well as equipping them to explore and find answers to their challenging questions, including proving them with exposure to different ideas and broadening their mind.

Personally, I think this is a really useful paper that underscores the importance of self-directed and supported development by coaches. This can be through a variety of the different methods as identified by the coaches interviewed by Rynne and Mallet, including formal and informal. An important take-away is that coaches should both seek and be open-minded towards new experiences, ideas, and ways of thinking, whilst having the time and skills to self-analyze and self-reflect on the impact each new idea or experience might have on the athletes they work with. As discussed by the coaches in this paper, the education and development of a high performance coach never stops.