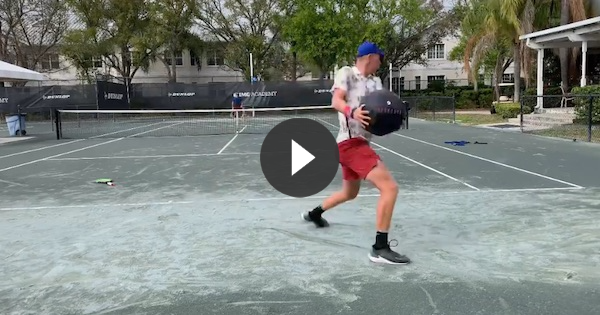 Tennis is the sport I have been involved in my whole life as an athlete, a teacher, a coach and now on the athletic development and performance side of the sport. Throughout the journey, the medicine ball has played a crucial role and has evolved into an almost daily part of our program both on court and in the gym.

The main reason we use the medicine balls so much is because they are so versatile. Besides the obvious of being a great power developer through moving the weighted ball at speed, it is also a great stabilizing tool that helps provide automatic feedback through kinesthetic feel and balance.

Its uses are endless, also serving as a great coordination tool for all athletes, but younger ones in particular as a starting progression to learning different lifting movement patterns. As a great kinetic chain explosive tool, it encourages an athlete to understand how to transfer energy through their postural strength. If the core is weak then energy gets lost as the core is the connector from lower to upper body. In tennis we produce from the ground-up, from toes to fingertips connected by the core.

Warm-up series – Medicine balls fit nicely in the warmup. We have a couple of different series we use as preparation for the gym lifts. It is a essentially a med-ball complex going through different movements, planes and range of motion e.g. Squat Swings – OH Slams – Skaters – Rainbow Slams. This helps prepare the neuromuscular connection for what they are about to do in the gym.

Reactive series – This series on the unknown side of training, where an athlete has the ball and may drop it at any time, the receiving athlete reacts and tries to catch the ball before it hits the ground, movements such as squat, split squat, single leg squat can be used to react to catch the ball. This prepares the central nervous system for what they are about to do in the gym and can be used as a “wake-up” exercise if athletes coming in are tired, especially coming to a morning session.

Bracing series – Exercises such as the half-kneeling throws to a wall or partner, encourage bracing skills. These throws develop a stronger core that can benefit the connecting postural strength. We can also use this in different stances used in tennis such as a neutral stance, open stance or semi-open stance.

Ground series – The main focus of this series is picking a ball of the ground and throwing it. The process of bending over and transitioning to a throw is a great kinetic chain teacher. As I watch my children (ages 4 and 1.5) pick-up their toys from the floor, you can see this perfect kinetic chain in action every time. As we get bigger we seem to forget through the environment that it’s a natural movement.

Tennis involves deceleration, finding balance (over 70% unilaterally) as the legs load and body rotates, upon release pushing bodyweight forwards often staying low to the ground to prepare for the recovery and next shot. Exercises such as squat, pick-up the ball, chest pass forward projecting the body forward, and landing on a single-leg can offer many of the benefits that fit the essential requirements for the sport of tennis.

To take this a step further, after competency is reached in the movement, we can add a speed reactive element after the landing to the left or right on the court e.g. Forehand or Backhand for a self-organization challenge.

Fake throws – Is a great decelerating tool for balance and control. e.g. accelerating the ball from left to right and stopping provides a challenge the athlete can make as hard as they want for themselves through using heavier balls.

Ribbon loop series – This is a series I’ve been exploring more recently thanks to the influence of fellow GAIN member Steve Myrland. He educated me in loops as he thought it would be a great tool for my tennis-athletes. And he wasn’t wrong, it has been a great addition. The concept is simple: make a loop while holding the ball.After sending Steve some videos, he described the benefits best, “It gives you high/low, start-stop, accelerate-decelerate, sagittal-frontal-transverse planes, mindful shapes, connected/connectable neural patterns, all manner of means of resistance”. I would also add that it can also be a great tool for shoulder prehab.

Smash and release – This variation involves connecting movements together, such as a med-ball slam followed by a neutral stance throw. This allows the player to self-organize after producing power under a time constraint. These are generally performance on the court to add context.

Wall Series – The wall series, like the smash and release, can be used to isolate throws or connect movements together e.g. stand close to the wall, throw from neutral stance and the ball pushes you back to stabilize off the back leg and produce a second throw.

Teaching tennis-efficient movement patterns – Here things get more tennis specific. The medicine ball by nature is a great teacher for helping players understand the efficient movement patterns of tennis. I believe before you learn to tango or salsa you first have to know how to dance in general, understanding timing, rhythm, how to orientate your body to the music etc. Tennis is played with a flow and rhythm, and thus movement should generally flow to a rhythm, general it is three steps after a split-step (a step-out external hip rotation of the outside leg, followed by a cross-over or lateral run step followed by a decelerating stop, load, rotate and release), you often then only have time for two recovery steps before you split again. This timing and rhythm is best done through kinesthetic learning which the medicine ball is a great teacher for.

The great thing about the categories above is that they teach movement while providing an element of self-organization. We can use them in the gym, as part of a warm-up, for an anaerobic endurance session, or, as a teaching tool on-court to teach some of the tennis efficient movement patterns. There are many physical and mental benefits, the key is to always make sure you have a reason (the why) for what you are doing that is simple to explain to the athlete that helps them connect to their objectives and goals. Providing context is hugely beneficial when delivering as this can connect the dots through the environment organically.

Johnny Parkes is the Head of Tennis Athletic Development at the IMG Academy.