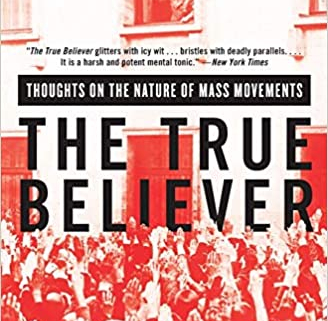 If you want insights and a deeper understanding of what is happening today this book is a must read. It was first published in 1952. I first read it for a class in college in the mid 1960’s. He is one of my intellectual heroes. As a college student I devoured everything he wrote. Eric Hoffer, the author resists classification. He had no formal education beyond early elementary school. He was migrant worker for many years and then a longshoreman in San Francisco. He was self-educated, having spent all his free time in public libraries reading history and philosophy.

The True Believer delves into the characteristics of mass movements. The characteristics of the ideologues who led the movements. Even though it was written almost seventy years ago, it could have been written today looking at the vents in our world. He saw Trump and Putin coming. If you are interested in learning more abbot Hoffer there is a timeless documentary called A Savage Heart featuring Eric Severeid on CBS interviewing Hoffer.