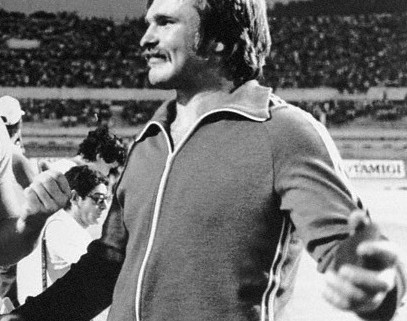 The man, the myth, the legend

I went to my first clinic with Sedykh when I was 20. I met him, his wife, and recorded his 10-year old daughter throw with better technique than my own. This led me down a path to learn more about his training and his coach Dr. Anatoli Bondarchuk.

My first article about Bondarchuk’s methods appeared in Modern Athlete and Coach. It took me years to finish since it was nearly impossible to separate the information from the misinformation on Soviet training methods. After eventually training with Bondarchuk I got to see first hand that half of the stuff written about his training was bogus, leading to perpetual myths like the Litvinov Workout. Even after the edits there was still one sentence I was uncomfortable with in the article. In discussing how much specific strength Sedykh possessed I shared an anecdote: “He regularly did plate twists in training holding two or more 25 kilogram plates extended in front of his body.” I found this hard to fathom, but it was verified by a half dozen coaches and athletes, so I left it in.

Fast forward to this week. Shortly after his death I’m scrolling through Instagram and stumble upon a picture from Rice throws coach Brek Christensen. There it is: Sedykh twisting while holding a couple of massive plates. It made me wonder how many other myths might be true as well:

This might seem like a small snapshot of history, but this picture is a representation of what made Sedykh different. While other athletes were chasing a big squat, he went a different direction. His technique, his training, and his strength were all focused on turning with the hammer. That singular focus helped him become the event’s best ever.

The term greatest gets thrown around a lot, but Sedykh truly deserves it. To understand how good Sedykh was, you just have to look at the current world record. He launched it 35 years ago and it still stands today without the slightest prospect of falling soon. All of the other men’s records in track and field have come and gone with the exception of the men’s discus, which has been under threat several times. Yet the hammer record lives on, stronger than ever.

Five years ago, on the 30th anniversary of the record, I shared memories of that day from Bondarchuk and also asked his rival Sergey Litvinov what it would take to break the record. Listening to Bondarchuk describe their focus in the competition and it is telling just how different their approach was. After a lackluster first throw, Bondarchuk had him focus on just one thing: “I talked about rhythm.”

Rhythm is what set Sedykh apart. As a developing thrower I watched the classic Sybervision hammer throw VHS over and over and over. I found it again yesterday and digitized the section with Sedykh’s throw. Skip ahead to the last chapter and you’ll see the rhythm in action. A picture (or video in this case) is worth a thousand words:

In reading all of the memories of Sedykh this week, one stood out from US Olympian Kevin McMahon:

Out of nearly a dozen training camps with Youri, this question from a young thrower: “Youri, what does throwing over 86m feel like?” elicited probably the most formative words in my athletic life.

After hearing the question. I remember Youri pausing – really making an effort to remember and relive the feeling – and thinking deeply about his answer. When he finally said ” It feels like . . . flying” he said it with a real sense of wonder.

The hair on the back of my neck stood up – and I was changed forever. After all, who doesn’t dream of flying. Those who’ve had even a brief experience of this amazing feeling know the truth of this statement – and that nothing else in sport feels remotely the same.

Flying is the perfect description, but it’s not one that many coaches use. Over the years I’ve uploaded some videos of Sedykh coaching athletes like McMahon and Dave Popejoy as well as Kevin Becker at clinics. In watching him coach you see how differently he thought about the event. Flying a plane is as much about aerodynamics as it is about raw power. It’s about vectors and shapes and motion. The same thing goes into letting the hammer fly. Immediately in the first feedback from the clinic you get an example of this in action when Sedykh tells Popejoy: “Leave the hammer free to the left.” Half way into the video is my favorite quote: “move the hammer, not the body.” Let the hammer fly.

The times they are a changin’

If a young thrower today wants a technical model for the hammer throw we just pull up a video of any number of throwers on YouTube. For Sedykh it wasn’t so easy. It was not just that YouTube didn’t exist, but that he and Bondarchuk were developing a new technical model.

Yuriy came up through the transition of old style technique (pull), to the new style (“push”). It was a perfect storm. Dr. Bondarchuk’s technical innovation of contemplating what would happen if we were to let the ball move us instead of dragging it behind presented the world with a new frontier for exploration.

This means that during his development, Yuriy was in uncharted territory that no man had ever crested. There was no one to look at as a guide to what he was trying to do and feel. He had to rely on Dr. B’s eyes and his feeling. As such, there were no judgments of what is or what isn’t “good.” He was free to move how he saw fit without fear that what he was doing was wrong.

The resulting technique was unique. He took elements of older technique such as using just three turns. And he combined it with new positions like this:

Then he added in that rhythm and the result was out of this world. When Litivinov passed away in 2018 I wrote that Sedykh’s technique was almost too good. I admired it, but as an athlete I often felt it was unachievable. Just think about it: he did in 3 turns something that no one in history has still managed with 4 turns. How can we even relate to such a performance? The best we can do is appreciate it for what it is.

The inspiration of beauty

When I think of the greatest athletes in any sport, they make it look easy and beautiful. It is a cliche, but it is true. Just watch Crouser casually toss the world shot put record this summer. Watching Sedykh is the same. It reminds me of some comments by David Foster Wallace when writing about the experience of watching Roger Federer play tennis:

Beauty is not the goal of competitive sports, but high-level sports are a prime venue for the expression of human beauty. The relation is roughly that of courage to war.

The thing about beauty is that it inspires. Sedykh the man might no longer be with us, but the beauty of Sedykh the hammer thrower will continue to inspire generations of throwers.