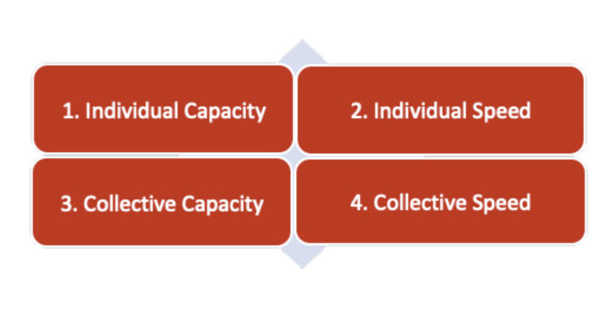 Speed is often what defines key moments in team sports and distinguishes the good teams from the great teams. The key question faces coaches then is: are we creating and environment that nurtures speed, or kills it? All too often we see athletes that fail to get faster as their careers progress or typically, regress in their speed. The systematic progression of athletic and technical capabilities should see running-based sport athletes reach their speed potential in their late 20s or early 30s. It is up to coaches to create an environment to develop speed to its full potential.

» Related content: Benton was a guest on this week’s GAINcast where he discussed game speed strategies in more detail.

It could be suggested we often place too greater emphasis on general running tests such as, 1.2km time trial (Bronco), 2km time trial or Yo-Yo. These tests are often seen as the ‘gold standard’ and lead indicator of running performance for field or court sports. However, in reality, these tests simply offer insights into general running capacity, which is primarily preparatory work capacity for more specific qualities – speed and speed reliability. General running capacity development is a means to an end – not an end in itself.

Defining speed and your speed limiters

For this discussion, the term speed is referred to generically as a quality that encompasses acceleration, change of direction and maximum speed. Our typical assessment of speed and repeat speed is undertaken without a ball and in a linear fashion. However, ideally, the best test of speed for team sports is it be expressed with key game actions, as part of the game plan and be maintained for the duration of the game.

Speed is also something that can be expressed both individually and collectively. Fast teams are not just a collection of fast players, they are players who can execute skills in unison at high speed. If we agree that field and court sports require our players to express speed individually and collectively, then it must be undertaken in training. As such, it is a matter of when and how – not if. In deciding the when and how we first have to identify what is limiting our speed. Consider the following quadrant, which can be used for profiling and for creating a hierarchy.

It is common for team sport programs prioritize categories 1 and 2, have a ‘one size fits all’ approach. If your limiters are individual capacity or individual speed, then this might help. Sometimes teams get stuck at this stage without thinking of what’s next. If teams no longer have significant individual limitations with capacity and have competent speed with individuals, then it makes sense to invert the hierarchy. Focusing on collective capacity and collective speed will help teams reach the next level.

Moving from individual to collective speed

It could be suggested that team, or collective team speed does not get the attention it requires with field and court sports. Any on field-court training operates on the endurance and speed spectrum. The manipulation of intensities and work-rest ratios allows us to target either endurance or speed as a mix, or as a predominance. Like individual, or small group speed training sessions, this can be applied in a team setting as well. More continuous team sport training that has work-rest ratios of 1:05-1:1 lends itself to endurance as a predominance. However, work-rest ratios of 1:15-1:3 lends itself to the development of speed and reliability of it. In short: a little bit more rest allows a high expression of intensity (i.e. speed). Both extremes of the speed and endurance spectrum are needed, but coaches need to recognize that they have very different physiological demands and outcomes.

Coaches sometimes have a fixation on volume to ensure repetitions of skill efforts at the expense of intensity and quality. Shorter work:rest ratios often leads to training that is one-paced and continuous in nature as players quickly learn to pace themselves. Training at intermediate intensities ticks none of the boxes we want: it neither replicate the game nor facilitates the improvement of individual/team speed. If we are training this way, it sets a precedence and ingrains habits in how we play we well. We cannot hope for high quality performance (match) with low quality preparation (training) – it just doesn’t happen.

Having a training intensity dichotomy and maintaining ‘intensity discipline’ is important. We obviously cannot train fast every day. However, to ensure we preserve days where training intensity is high, we must polarize this with low intensity days. Often coaches and players don’t show ‘intensity discipline’, which sees us getting caught ‘in the middle of the road’. Younger players find it easy to train at a higher intensity when low intensity is required and lack the courage to train at high intensity when it matters – because it hurts. This approach also creates metabolic and musculoskeletal fatigue and doesn’t permit recovery for the subsequent high-intensity days.

A training week can be periodized so as training can be completed along the entire endurance and speed spectrum. Training with work-rest ratios of 1:15-1:3 initially feels uncomfortable for coaches having to wait during recovery time; it also takes players time to trust themselves (and the coaches) that they can go hard and be afforded appropriate rest to go hard again.

Sometimes coaches will attempt to intentionally overload-stress skills with fatigue, which does have its place with skill acquisition. However, the overload-stressing of skills with speed is something that is often greatly undervalued. There are meaningful technical and tactical benefits to training at the speed end of the spectrum – execution under pressure of time and space and reading the game – quickly. Also, it is as much about reducing the timescale for the opposition to make decisions.

Training at high intensity and with more extended recoveries often makes the typical GPS rate dependent metrics such as, meters/min redundant. However, it makes the referencing of absolute and relative speed metrics much more relevant. Also, as a generalization, we are often erroneously focussed on distance covered in training sessions, which is quite irrelevant. What is more important is how this volume is derived. Ultimately, we should focus on increasing the volume of our intensity metrics. Despite much pseudoscience around GPS, it is a coaching tool. Athletics and swimming coaches use a stopwatch to gauge intensity. GPS is a team coach’s stopwatch. As such, GPS should primarily be seen as tool to optimize training intensity, but ultimately improve the pace at which we play. You can always slow a game down, but you can’t speed it up unless you have prepared fast.

There will always be an interplay between attack and defense in terms of tactics and countertactics. However, there is one tactic where there is no countertactic: pure speed.

Dean Benton is the National Head of Athletic Performance at Rugby Australia.