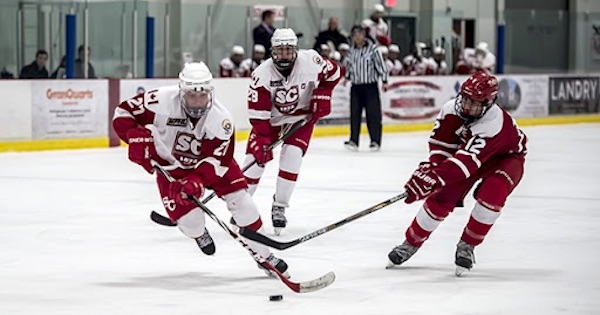 Physical performance for ice hockey requires that athletes possess well-rounded physical qualities such as speed, muscular strength and power, anaerobic an aerobic fitness, mobility, and stability given the multidirectional, high-intensity intermittent efforts of the game. These physical qualities also support the development of sport-specific skills such as skating, shooting, and passing the puck.

In recent years, ice hockey has experienced a shift in mentality which resulted in players now relying on speed and skills rather than pure strength to prepare for the demands of the game. For the athletic development coach, it means that regular exposure to speed training, both off and on the ice, is now an essential element of their training program. In this article, I will provide some tips about how to periodize and implement speed training during both the off-season and in-season.

Will off-ice speed training actually transfer to the ice?

Like other sports where athletic development and game play occur on different surfaces or in different environments (aquatic sports are also another good example), a useful starting point is to look for commonalities based around principles of training and performance. When examining the research about off-ice and on-ice physical testing for ice hockey, off-ice sprints usually correlate well with on-ice skating acceleration and top speed. From a biomechanical perspective, while the hockey stride is obviously different than overground sprinting, they both rely on proper force application. Skating speed, like sprinting speed, can thus be considered an interaction between stride length and stride frequency. From a training perspective, we can therefore be quite confident that adding sprints to our off-ice training regimen will provide beneficial.

Because of the demands of the sport, ice hockey players tend to have very stiff hips and less than ideal sprinting mechanics. Many tend to cross the midline of the body with their arms, which generates unwanted rotation of the upper body. Also, because they spend so much of their time in skates, they tend to not be very reactive with their feet. A good first step in implementing speed training would be to focus on posture and coordination training with the addition of resisted marching, skipping and in-place drills like the wall-drill to address posture and emphasize a piston-like action of the legs.

Not too long after the start of off-season training, I will integrate starts and accelerations over short distance in addition to these previous drills while improving the leg muscle qualities of strength, power, and reactive strength concurrently. To do so, I find the best available options to be hill sprints and resisted-sled sprinting.

Hill sprints will improve force and power of the lower body muscles and are similar to the start phase of sprinting on flat ground while being less stressful. Short hill sprints are great for speed and explosive strides while longer hills can be used in the form of interval training for muscular endurance and conditioning. Find a hill not too steep, set two cones 10-30 yards apart, sprint the incline, walk back, rest a bit longer, and repeat for 6-10 repetitions. On the other hand, resisted sled sprinting is a useful method to overload the acceleration phase of a sprint because it overloads the muscles of the legs and helps with proper running mechanics. If sleds are available, a range of loads can be used to focus on different phases of a sprint. When working with developmental athletes or large groups, using a percentage of bodyweight as a sled load will do the trick.

Using a short-to-long approach to sprint training with a focus on acceleration allows the athletic development coach to reinforce proper sprinting mechanics while also allowing time for tissue remodeling (think regaining mobility and tissue/muscle length) following the long competition season. As you progress into the off-season, multidirectional acceleration work can be introduced and planned changes of direction with an emphasis on technique added to the training program.

Speed training before and during the competition season

The development and/or maintenance of speed can become quite tricky during the competition season. As we know, speed is best trained in a state of relative freshness, meaning that athletes should have little fatigue if you want to train/develop this quality. With the higher number of on-ice training sessions and games over the course of a typical week of training, ‘microdosing’ speed can become a valuable option.

As I have shared in a previous article, I tend to program a single set of 4-6 reps of short sprints over 10-15 meters as our minimum ‘dose’ for speed work with developmental ice hockey players. This speed work is always done when an athletic development session precedes an on-ice technical-tactical session. If a team comes for an athletic development session after their on-ice team training, we move on to the power and general strength exercises that make up our off-ice sessions.

When we seize the opportunity to do some speed work during the competition period, I like to program more variety in terms of exercise selection. Given the need for multidirectional accelerations on the ice, we will perform short sprints from a variety of starting positions (static vs dynamic starting position, standing vs on the ground, parallel stance vs staggered, etc.) and in different directions (forward, diagonal, lateral with crossover, etc.). For example, forwards will tend to perform mostly linear sprints while for defensemen, we will add a 180° pivot to replicate the need to pivot from forward to backward skating. For goaltenders, considering the small playing area in front of the net that they cover, we will focus on the first few steps of a sprint and perform lateral or diagonal movements. The figure below provides an example of different sprinting exercises with starts and accelerations being the focus during the competition season. When training time is limited during the season, you cannot go wrong with stair sprints and given the facilities required to play ice hockey, you are sure to find plenty!

What about footwork or foot speed?

You’ll often hear ice hockey coaches mention that players need to be quick or quicker on their feet. This is particularly true on the ice when playing in tight spaces and battling for the puck against an opponent. To address this essential component of change of direction/agility, I will tend to combine our sprint work with some footwork exercises. This can be done in the form of agility ladders, cone drills or low hurdles drills preceded or followed by a short acceleration. The effects of agility ladders on performance may not be supported by the literature, they do provide us with an accessible piece of equipment to add variety and complexity to our training.

Surely, off-ice sprint training provides ice hockey players with a generic foundation for speed. Nonetheless, some adaptation time may be required to be able to efficiently apply and orient these forces in skates, on the ice.

In addition, as expressed by Dean Benton in another article this past month, speed needs to be expressed not only individually but also collectively. It is therefore essential to also train speed in the context of the game of ice hockey. Collaboration with the ice hockey coaches is therefore essential at this point and should focus on improving not only skating speed but also cognitive speed. Introducing a variety of scenarios where players need to execute different skills (skating being one!) under time and space pressure can result not only in improved performance physically, but will also enhance learning!

Xavier Roy is the owner of XR Performance and teaches in the Department of Sport Studies at Bishop’s University.