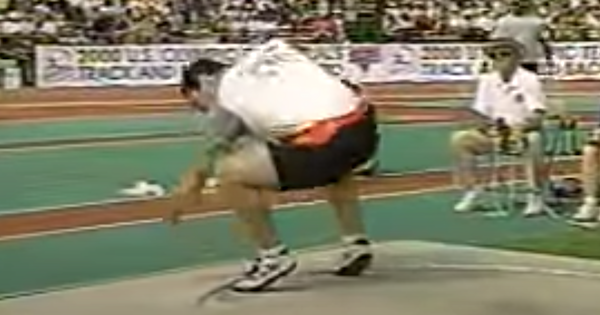 Throughout the month we’ve been looking at different perspectives on throwing. Normally our throwing content focuses more on training methods, but recently we’ve also been giving special attention to throwing technique. One common theme has appeared over and over with different athletes in different events: the best throwers find a technique that works best for them, rather than chasing a one-size-fits-all technical model. Our recent video lesson on hammer throw technique shares some specific examples of this from the hammer throw. Below are three lessons that athletes in all events can learn from in order to find their own throw.

Lesson 1: there is no perfect

We often embrace the idea that there is an objectively ideal technique we all aiming for. But chasing ideal technique is a lost cause. It doesn’t exist. Philosophers have been writing about ideals sine time began and it was a big focus for Plato back in his day. For him the ideal form of any object–from a chair to a chariot–doesn’t exist in reality. It was just a theoretical concept. Reality is filled with variations of the ideals that we can think of as shadows or reflections of that theoretical ideal.

The same goes with throwing technique. Each thrower’s technique is simply a shadow or reflection of the ideal. It has to take into account all the imperfections of reality and how different athletes find the most efficient way to deal with them. Every athlete will be different. The environment is different. The situation is different. The shadows are therefore always changing and who is to say what is perfect.

Stepping outside of the throws, motor learning expert Professor Rob Gray joined the GAINcast last week to put to rest the myth of the one-size-fits-all technical model. Movement is about solving problems, he said. And since the environment is constantly changing, solutions have to change with it. That is similar to how Kibwé Johnson described the situation in the throws in his article last week: “The end goal is the same: throw far. But the starting point is different. Therefore the path between the start and end points is by necessity unique for each thrower.”

If there is no perfect technique to chase, then how do we orient our technical model? By embracing differences. The individualization process begins with an assessment of an athlete’s strength or weaknesses. As Andy Bloom put it on this week’s podcast:

“You have to figure out what you do well and what you don’t do well. I found a technique that helped me capitalize on what I did well.”

The same goes with world record holder Ryan Crouser. He has a very distinctive technique, starting much slower than his competitors. As he wrote about in a recent article, that is by design:

“I can’t have a sprint dynamic technique – I have to have a technique which is very conservative, which is focused on how I keep my 6ft 7in self from fouling at the front of the circle. I’ve spent most of my career figuring out a technique that works for me.”

Crouser’s size gives him leverage, but it also means he’ll eat up the ring if he starts too fast. So he starts slower to ensure he gets into a position at the end of the throw that allows him to get the most out of his leverage.

It’s not just about differences in size and strength. Back to Andy Bloom, his distinctive characteristic was how he bent forward at the start of the throw. That was by design. Unlike Crouser, it wasn’t designed based on his strength or size, it was based on his tendencies. He had a tendency to bail into the middle of the circle. By learning forward he was trying to counteract his tendency to fall back. It’s as simple as that. Other throwers might have other tendencies and have to adapt their technique to avoid that.

The proof in the pudding as well. As Kibwe’s pointed out in his article and in our video lesson, Dr. Bondarchuk was hands down the top hammer throw coach in the history of the sport. What is more interesting than his success is that each of his 80-meter throwers were different: different strength numbers, height, arm length, coordination, and, most importantly, different technique. Bondarchuk was a master of helping athletes embrace their differences and find their own path.

Lesson 3: focus on the main things

The first thing you might notice when you watch Deal’s throw is his footwork. His left leg has a typical “discus leg” where his knees are further apart and the foot sweeps around more than having an active step. He knew it was an issue, but at the same time it wasn’t his priority. Here was his thought process in designing his technique together with his coach Stewart Togher:

“We were just worried about using the ball, we never got to that. Maybe in another 10 years we’d be able to learn to keep that knee close and speed speed up a little bit more. But you got to go with what you know works.”

Would he have thrown better with smoother footwork? Perhaps. But you can’t fix everything and focusing on a more superficial point might distract you from the key things that are even more important to execute.

My conclusion is that not just that people throw differently, but that they need to throw differently to get the most out of their throw. Does that mean there’s no such thing as good or bad technique? Of course not. Saying everyone’s technique needs to be different doesn’t mean that there is no such things as good or bad technique. Good technique still exists. It just isn’t measured against some objective standard. Instead, the best technique is the technique that is best adapted to the athlete. The best throwers find their own throw.