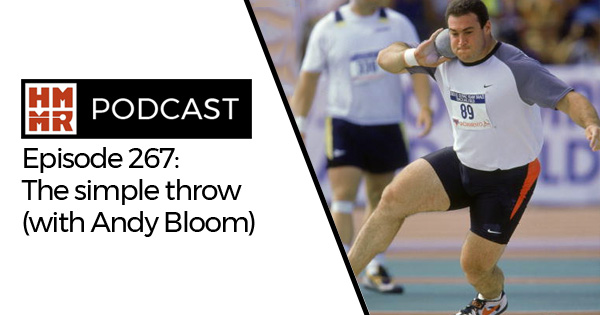 The 2000 Olympic Trials remains one of the most historic shot put competitions in the history of the sport. In the fifth round underdog Andy Bloom stepped into the ring, bent over into his iconic starting position, and unleashed a massive throw to secure his spot on the Olympic team. That wasn’t just luck; Bloom had spent his whole career developing a simple technique that he could execute under pressure. On this week’s podcast Bloom looks back at his career, break down his own technique, and discusses his thoughts on throwing and training.

With personal bests of 21.82 meters and 67.46 meters, Andy Bloom is one of the top combined shot put/discus throwers in the history of the sport. He was an NCAA champion in both events, as well as US indoor champion twice in the shot put. He made the 2000 Olympic team in the shot put, here he placed fourth. He also won the 1999 World University Games. After retiring from thrower he worked as a strength and conditioning coach before becoming a math professor.