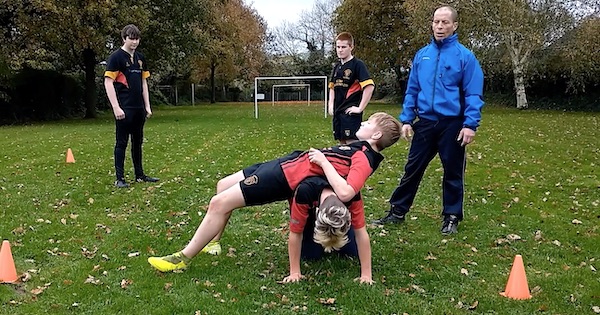 No matter how we train, contact sports such as rugby will always have an inherent amount of injury risk. That’s part of the business when people run into each other at speed. As coaches we might not be able to eliminate that risk, but we can minimize it. This article offers a few ideas of how we can help mitigate many needless head, shoulder, and wrist injuries that occur during tackling practice and games by teaching players how to move better.

Coaches often focus on teaching the skill, rather than preparing for it. You can explain all you want about proper tackling position, but if players are not physically prepared for contact it will not end well.

Players who are unable to control their own body will find it impossible to control another player. If they are unable to get into the positions required then the tackle technique is dangerous. Instead of bending the legs and keeping their heads up when tackling to enable a stiffer torso, they often buckle from the waist and hunch over. They then crumple like a concertina. The lack of physical competency is accompanied by either a sense of self-preservation that leads to half-hearted attempts or a sense of reckless abandonment that results in limbs flailing and heads being used as battering rams. Both result in increased risk of injury and the players choosing, or forced, to stop playing.

When teaching contact, rather than start with the tackle situation and try to get everyone into the correct positions, I suggest used a staged approach to training. I typically progress athletes through three stages:

By focusing first on stages 1 and 2, teaching the tackle becomes a lot easier once we get to stage 3. Players gain awareness of how their body works and how to control it. They then learn basic leverage and positioning when grappling and wrestling that teach them intrinsically how to get lower and brace. It is a less direct route but one that should be considered if you want to avoid losing half of your squad to unnecessary injuries. Here are some ideas that will help rugby coaches introduce this in training.

Schools used to do a thing called physical education. Children would learn about how their bodies moved and do a variety of exercises that helped them develop this understanding. Unfortunately, there now exists a mish-mash of incessant games, competitive fixtures and mindless strength training in the form of planks, burpees or bodybuilding derived strength exercises, none of which help the child move better.

The child taking up rugby in 2022 has very limited movement exposure. They have to be taught. If the rugby coach, the soccer coach, the hockey coach and the PE teacher all think that it’s someone else’s job, then the children never learn. If PE is not doing the work for us, we as coaches need to take ownership and step in with some solutions.

Where do you start? Start at the start of training with the warm up. Why not put some exercises in there to help the children that can then help them learn the techniques better?

I suggest some staples that help improve physical literacy, physical strength and physical fitness if introduced gradually and consistently. All of them provide a great starting point:

The links above show video examples but there are many other variations. The more variety, the greater the bandwidth the players have and the more adaptable they are. Too often rugby coaches are either told or regress to a very limited set of exercises that lead to boredom and limit the players’ potential. Expand your toolbox and you’ll increase player engagement as well.

There are many different ways to coach a skill. Demonstrate-observe-correct is one method. This has limited effectiveness when children have no experience with an activity. The only time kids might have wrestled with their dads is when they are fighting over the PlayStation controller. They are forbidden from wrestling at school and are told to stop fidgeting when they are required to sit in a classroom all day.

Setting up simple wrestling and grappling drills between similar sized children allows them to learn intrinsically and has the added benefit of releasing that pent-up frustration. Ensure players are similar size helps make it less intimidating and safer to introduce contact. Another factor that helps is to prevent collisions by having players start in contact with each other already. This also gives them a feel for when their opponent is about to move and how their bodyweight shifts.

Some basic options in this area include:

Do not turn this into a gladiatorial contest with spectators and score-keeping: that leads to humiliation, frustration and anger. Instead, keep a constant rotation between players and keep the drill short: less than 15 seconds.

By the time you have taken your players through stages 1 and 2 they will have an understanding of what their left and right is, how to lower the body, how to balance and move when in contact. They have a sense of what is involved. Using a standard demonstrate-observe-correct method at this point to introduce tackling will all of a sudden be more effective for players and coaches alike.

If you would like to see videos and progressions of these drills and many more, then check them out on our GAIN rugby workshop. While the course was originally designed for rugby, the components of contact training can be applied just as easily to any contact sport.