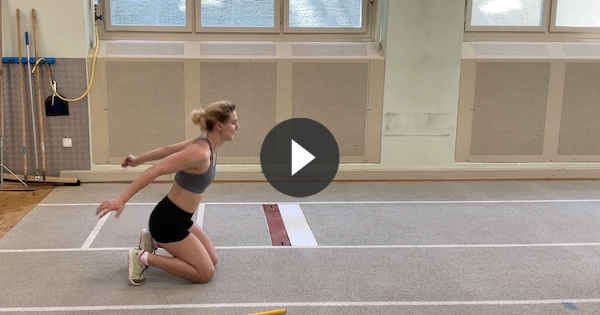 Jumps come in all different forms, and so does jump training. By tweaking how we perform jumping movements in training, we can focus on different physical qualities and skills.

For example a standard countermovement jumps or squat jumps are more knee dominant, primarily utilizing power from the quadriceps to extend the knee. Allow athletes to use their arms and they can create more momentum from the shoulders as well. Reactive drop jumps, on the other hand, are more ankle dominant. Top performers have great ankle stiffness that allows them to have shorter ground contact time despite the higher eccentric forces. But what about the hips? The hips play a central role in nearly all athletic movements, but jumps training often neglects the action of the hips and core.

It’s all in the hips

The hips are at the center of the body, connecting the largest muscles and movements. The hips are also key to sprinting and jumping movements. Good hip action can make or break performance. Frans Bosch helped popularize hip lock exercises to promote better concentrations around the hip in sprinting. But an even simpler concept is hip projection. The best sprinters in the world are masters of hip projection. They don’t focus on how the legs move forward, they focus on how the hips move forward.

The few jumping exercises that do integrate the hips normally looking at different aspects of hip movement. For example hurdle hops or box jumps require a lot of hip action, but the hip action they require is flexion, not extension. The result is often less projection. The best athletes at box jumps are often those who have more mobility than projection. How can we integrate more hip projection into jumps training?

Another exercise that I picked up from Frans Bosch and Leigh Egger is what they call the sandpit jump. This simple jump variation is effective in helping athletes feel and develop hip extension and projection. In its simplest variation, athletes start in a kneeling position and jump to their feet. Since you are starting on the knees, this limits the contribution of the ankle or knee. The only way left for the body is to use the hips. The hips have to extend up, and then also quickly flex as well to effectively land.

This combination of extension and flexion is a key feature of sandpit jumps. Athletes not only have to generate a powerful hip extension, but that have to do that while maintaining optimal position and length of the pelvis and abs so that they can quickly flex again afterwards. Otherwise they simply won’t land the jump. In speaking with Leigh, this aspect of sandpit jumps makes him think of them more as a core exercise when it comes to session design and themes.

You can build off of this starting point in different directions, helping focusing even more on the hip action, increasing the vertical or horizontal projection, and also adding in other factors like ankle stiffness. John Pryor and Leigh Egger’s SPP app includes many variations, and here are a few examples I use as well:

Jumping is a whole body exercise, but often our jumps training neglects key aspects of jumping that come from the hips and core. Sandpit jumps are one example of how rethinking jumps can help you focus on different parts of the movement.