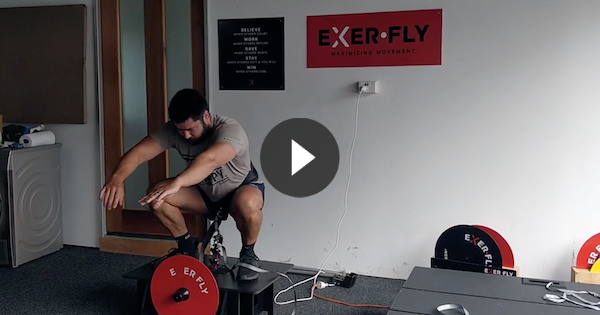 For decades research has shown numerous benefits for pure strength, speed, and power athletes. Practically speaking, however, it is not always easy to implement eccentric work into training. Achieving eccentric overload with traditional strength training is a pain. Having multiple spotters or adjusting weight releasers are typical forms of accentuating the eccentric phase during compound exercises like the squat or bench press. But the complications involved in eccentric training have left it as an afterthought to many coaches. Advances in flywheel and other technologies are starting to not only make eccentric training more accessible, but allow for new methods of eccentric training. Below I will overview eccentric training, its key benefits, and then share some ideas on how to achieve it using flywheel devices.

What is eccentric training?

Let’s start with a little explanation of what I mean when I’m talking about eccentric training. An eccentric contraction is the motion of an active muscle while it is lengthening under load. Concentric action, on the other hand, is the motion with the muscle is shortened. As an easy example, in doing a squat the quadriceps are lengthening (eccentric) on the descent while shortening (concentric) on the ascent.

The benefits of eccentric training

Creative solutions for eccentric overload with the flywheel

Flywheel technology has come a long way, becoming an excellent tool for emphasizing the eccentric phase of movement without needing multiple spotters, supramaximal loads on the spine, or adjusting weight releasers. In other words, it has helped bring eccentric training to the home gym.

The simplest way is to use the new generation of flywheel devices which have a built in motor such as those from fellow Kiwis over at Exerfly. These allow you to have motorized assistance in the concentric phase (set, for example, at 10%) so that the eccentric phase is boosted to the same degree.

But what if you have a flywheel device without an eccentric motor? You can manipulate how the exercise is performed, so the eccentric phase is more demanding and, therefore, overloaded. Here are some ideas, with some video below as well:

Flywheel training has been shown to enhance jump, sprint, and change of direction performance even with short 5–10 week training interventions. For example, academy-aged soccer players saw a 3.3% reduction in flying 10 m sprint times using eccentric flywheel training. On a more personal level I’ve found the flywheel to be an epic tool for overloading the eccentric phase. There is no chance I’d be performing accentuated eccentric training without a flywheel device, especially out of a home gym. I just don’t have the equipment or training partners to do it safely. By simply wearing a hip belt, I can overload my legs without the immense axially loading on my upper body. Further, flywheel training seems not to create the same level of DOMS as traditional eccentric training. For example, I recently performed maximal speed Bulgarian split squats. I’d always have soreness at the glute-ham tie-in using dumbbells or a barbell. But with the flywheel, I had no soreness whatsoever. Many others report similar anecdotal findings. Flywheels are an excellent tool to add to your training arsenal for a simple high-intensity training stimulus.

James de Lacey is owner of Sweet Science of Fighting and former head of strength and conditioning for Romanian Rugby.