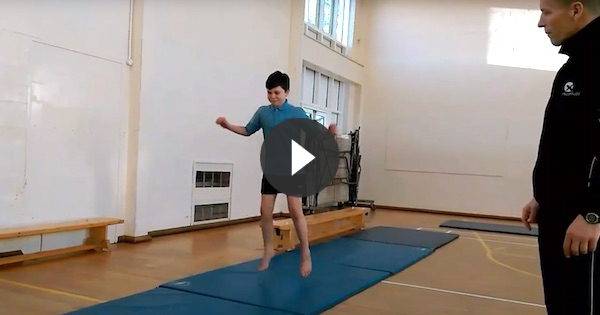 With the spring season nearing an end, many coaches are looking toward summer training. With summer training comes testing as well. Several of the football and rugby players that I coach will be subjected to a battery of fitness tests that include various jumps: depth jump, countermovement jump, squat jump, and single leg jumps.

In working with these athletes, it is curious that so much focus has been spent on measuring their jumps, with little emphasis being placed on the quality of their jumping. They have never received their results or been shown how to technically improve. Subsequent jump training hasn’t focused on anything learned in the testing. If jumping is important for team sports players, then we should think about improving the quality of the movement before we start measuring it. Below I shall lay out some ideas that can be incorporated into regular practice at no cost to coaches.

But we need a number!

The random number gatherer gets paid to collect numbers. But all numbers are not created equal. Data is not worthwhile if it is not:

The standard testing protocol follows the sequence of: test, train, and retest. This approach only works if the above criteria are met. If an athlete does not have stable and reliable jumping technique, for example, any improvements in jumping may well come from a learning effect rather than an increase in power and tell us little about how our program is working.

You can see this illustrated in the following a fencers performing a broad jump test:

The fencers being tested that day had all competed at an international level. My physiologist colleague has gathered over 20 years of jump data and has witnessed a decline in the jump performance (distance covered). But the head coach and physiologist both knew it was a mistake to assume these high-level fencers were less talented than their predecessors from the decades before. The fencers had all been training in some form or other, but usually doing box jumps in gyms or copying complicated plyometric sequences that famous fencers posted on Instagram. They lacked the underlying jumping ability that had previously been developed through play and structured physical education programs.

Program design must reflect the initial level of the athletes, not a hypothetical model where the quality of movement is assumed. If you teach the athletes how to jump rather than tell them to jump, you can plan your training around that instead of using depth jumps and repeated jumps that are ineffective due to the lack of coordinative demands. Even more important: the chances of getting injured and sore are also reduced if you start teaching athletes how to jump.

Where do we start?

It helps to go back to the basics. Many young people are unable to do a hopscotch pattern of 1-2-1 feet. Fewer still are able to do this with their non-dominant leg. When testing the broad jump I see a lot of people taking off with a slight delay in one foot. They are unable to push off both feet simultaneously. This is a developmental stage of jumping that needs to be practiced before distance is measured and is often caused by a lack of balance in the athlete: they step slightly to gain their balance before pushing.

The two-footed take-off can be seen in children as young as five. At the same time experienced footballers often lack the skill. If the athlete is doing a slight step in the broad jump it will be difficult for them to achieve full extension at take off, let alone worrying about what they are doing in the air and on landing.

Practice sessions for beginners should be structured so that athletes have to focus on the take off rather than distance covered. In the video below you can see an example of me guiding the two boys through a sequence of jumps. We use lines and skipping ropes and bodies to jump over helps the athletes think about what they are doing. We focus on creating an environment that challenges athletes to compete five foot patterns:

Once those patters are mastered, we progress them by adding combinations of movements or short run ups into the jumps. There is little point trying to teach long jump to pupils who are unable to do a hopscotch pattern. They will just make mistakes faster.

From movement to measurement

Only after jumping competence has been established do we start to think about measurement. But how do you measure? I remember being told to count foot contacts in order to measure load within plyometrics. That might be a good concept in theory, but good luck trying to count the foot contacts with a class of 30 eight year-olds warming up before athletics. Children can do also do a high volume of little movements such as hopping, skipping and jumping. They stop when they get tired.

With teenagers, I don’t measure the contacts until we get them doing higher intensity bounding or repeat jumps. Not all foot contacts are created equal: eight jumps over high hurdles in a row is not the same as going up and down a hopscotch grid. Fast and light contacts can be done more frequently than deeper and longer contacts. Even then I would rather do 4 sets of 10 meters or 3 sets of 20 meters and focus on the quality and speed of the movement before counting each individual contact.

We also only bring out the tape measure once the athletes are more advance in their movements. Not only will they be jumping and landing more safely, they will also be co-ordinated and confident. I can then look to see if we need to train strength and power with other methods such as resistance training and more advanced jumps. In other words, with a solid base we finally get some numbers than mean something and that we can learn from. But this is the final step in the process, not the start.