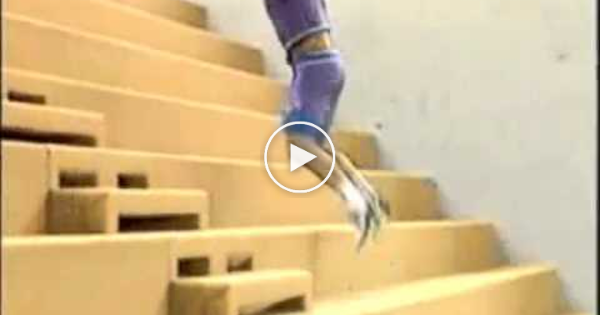 When I think of jumping for throwers, Werner Günthör is the first athlete that comes to mind. The 130-kilogram Swiss shot putter could almost fly and this explosive strength helped him capture three world titles. Jumping is perhaps the ultimate expression of power and can play an integral role in preparing throwers. But as with anything, it needs to be adapted to the needs of the sport and athlete, especially in a sport whether athletes can be massive. Below are a few considerations for integrating jumps into the physical preparation of throwers.

Walk before you can run

Many times when we see cool jumps on Instagram (or VHS, as it was when I first saw Günthör’s training video) we rush out to try it ourselves. This often leads to disaster. We need to understand the context and build up to the fancy stuff before we just copy other athletes.

The context of Günthör is that he had a stronger foundation in jumping than perhaps any other world-class thrower. When he began as a skinny decathlete he learned how to jump the right way from the start. By the end of his career he had reached an incredible jumping ability, jumping over 2 meters in the high jump while competing in the shot put.

Most throwers do not have Günthör’s athleticism and background, so that means they probably need even more focus on the basics before trying his jump routines. A good place to start are simple things like jump rope or low amplitude jumps. These are low-risk, help develop coordination, and gradually let the athlete build to higher amplitudes. In HMMR Classroom Video Lesson 4 Nick Garcia lays out his simple approach and progressions for beginners here.

Keep an eye on loads and volume

Despite Günthör’s jumping background and skills, he was still plagued by back and knee injuries throughout his career. It is hard to say that jumping alone was the culprit, but you can’t ignore the massive amount of stress plyometric training puts on large bodies. This is simply physics: the higher the mass, the larger the forces.

Does that mean we should simply avoid jumps for the big boys? Not necessarily. There are some ways to mitigate the impact. Focusing on emphasizing the jump over the landing is one way. Standing long jumps into sand, for example, allows for concentric power development without a hard impact or landing. Jumping onto mats also dampens the landing. You can also reduce impact by minimizing the amount of distance the body falls after the jump, such as by jumping up a hill or jumps from kneeling positions.

And, just as important, think about volume. A small amount of intense jumps can be a powerful stimulus. In talking with throws coach Derek Evely several years ago he advised that he didn’t do any more than 8-12 repetitions of jumps in a single session for his throwers. When you weigh risk and reward, a little can go a long ways.

Know what you want to train

Jumping is a training tool that develops a lot of different things: reactive strength, explosive strength, power, coordination, and more. Knowing which of these elements is important to your athlete is critical to getting the most out of jumping.

Coach Rolf Ohman gave a great example recently when discussing hurdle hops. If you’re doing high hurdle hops to develop reactive strength, then you are barking up the wrong tree. Most high jumps have long contact times, and reactive strength requires quick contact times more similar to sprinting. Same with high drop jumps. You’re better off doing low amplitude reactive jumps with little knee bend if that is your goal, and you’ll also likely reduce injury risk simultaneously. If you’re using higher hops to work on force production, on the other hand, it could fit. It’s all about making sure the jump matches the goal.

While general jumping skills are crucial, getting more specific with jump programming can give some additional advantages with more experienced athletes. Here it helps to think about what type of power you need to create in the event, and then how different types of jumps can help assist in developing the specific power needed.

If you look at Bondarchuk’s data on training correlations for throwers, different jumps have better correlations to performance in different events. The vertical jump shows better connection to the shot put, while standing long jump is a better indicator in the javelin. Neither shows a high connection to the hammer throw. Why? Likely because the release in the shot put is much more akin to a vertical jump in many cases. The javelin is more about producing horizontal force than vertical force. And the hammer is about staying connected to the ground as much as possible.

How does this translate into training? Derek Evely once again had a good example from the hammer throw. In the hammer we are trying to maximize ground contact time rather than minimize it. So his jump training for hammer throwers was focused on these elements:

“With the hammer guys I do absolutely nothing that is reaction off the ground. Everything is a push up onto a box and then they jump off the box and land sitting in a high jump mat simply because I’ve learned my lesson from jumping over hurdles and getting people hurt.”

The ideas above might be discussed in relation to the throwing events, but the same concepts apply when analyzing how you apply jumping to any event or sport. Build a base, adapt to your athletes, understand your goal, and then find out how you can work in more specificity.