Earlier this week Nick Garcia posted about exercise classification for throwers and provided some great examples of specific/special strength exercises in the shot put and discus. Along those lines I thought I would share a great series of videos on special strength for the hammer throw by world championship finalist Marcel Lomnicky.
END_OF_DOCUMENT_TOKEN_TO_BE_REPLACED 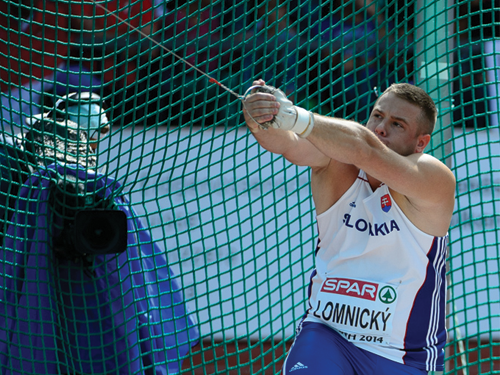 A former world junior bronze medalist, Marcel Lomnicky took a leap of faith and moved from his native Slovakia to America in 2009 to chase his dream of repeating that success at the senior level. In his first year at Virginia Tech he was the NCAA champion and he has improved steadily every season since. In the past two years he has come close to that goal by making the finals at the World and European Championships. This year he consistently placed on the podium in the European circuit and set a new personal of 79.16 meters.

But perhaps more impressive than his results is the fact that he is self-coached, a rarity among world-class throwers. He has been writing his own training programs and also coaching himself technically since the 2011. Already in his first year he made a breakthrough and qualified for his first World Championships. I’m contemplating my own future in the sport and will likely embark on writing my own training plan next year as an experiment. Therefore I wanted to pick Marcel’s brain on how he has made it work so well.

For more information on Marcel, check out his webpage, where he offers coaching, video analysis, and an insider’s newsletter. You can also follow him on Facebook and Twitter.
END_OF_DOCUMENT_TOKEN_TO_BE_REPLACED