World discus throw champion Robert Harting is always one to grab headlines and this April he announced that he would love to have a discus throw competition over the Spree river in Berlin. That never materialized, but the Swedes did one better yesterday. As a prelude to today’s Karlstad Grand Prix, the city hosted a hammer throw competition on the banks of the Klarälven river. And by banks, I mean the opposite banks. They installed a hammer throw ring on one side of the river and attempted to throw to the other side. Fans surrounded the cage and lined up on the bridge to watch.
END_OF_DOCUMENT_TOKEN_TO_BE_REPLACED 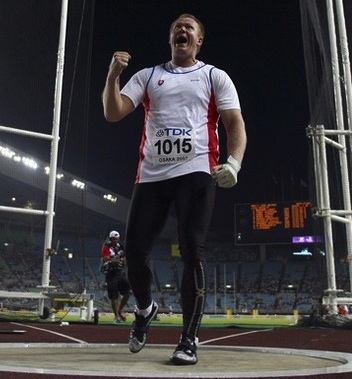 When the IAAF announced the new IAAF Hammer Throw Challenge last November, I was skeptical. My mindset was already biased and bitter because the hammer throw was not included in the Diamond League, but hearing about the new Hammer Challenge only made me feel worse about the future of the event. I felt like someone was selling me dirt and calling it a diamond.

The initial announcement for the Diamond League six months earlier had the opposite effect. I was excited. The Golden League often held only one, if any, throwing events. The Diamond League, on the other hand, offered more opportunities for the throwers. In the initial press release, IAAF President Lamine Diack even said, “It is great for me to be able to announce that all events* of our sport will be touring around the world.” But, as I read on, I realized that ‘all’ did not mean all since an asterisk had been inserted into his quote. That’s the first time I’d ever seen an asterisk inserted into a quote from a press release before. As I scrolled down I was informed that that Diamond League was very distressed that they could not include the hammer throw in this new series due to ambiguous “infrastructure” reasons which have yet to be clarified in the last 18 months. However, the IAAF promised a new hammer throw challenge to help compensate the hammer throwers for being kicked out of the inner circle. Maybe, I thought, things would turn out okay. After details of the Hammer Challenge finally emerged in February, it became clear that we had been screwed.

What actually hurt the most was that the IAAF tried to spin it as a gift to our sport with a headline reading, “IAAF throws weight behind Hammer discipline with $202,000 purse.” That is indeed a large amount of money, but it isn’t any more than the hammer throwers were receiving under the old system. Rather than “throwing its weight” behind the hammer throw, the IAAF was pushing it to the periphery of the sport as the other throwing events got promoted to the big leagues.

To get into the details, the new series did not really create any new opportunities for hammer throwers. Most of the meets included in the “hammer challenge” had already hosted the hammer throw in previous years. And, to make matters worse, not only was the hammer throw relegated to the second tier meets, but it was by far the worst paid event at the second tier meets. For instance at the Zagreb meeting the winners of every international event earned $4,000 to $5,500, except the hammer throw which took home just $2,000. This was the case at every meet. While there was a year-end jackpot to supplement this, previous years allowed athletes to earn just as much money at the World Athletics Final. 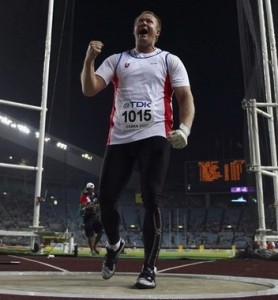 Libor Charfreitag is not a fan of the this year's new IAAF Hammer Challenge. Photo from TopAthletics.org.

In addition, if you were a spectator at any of the hammer challenge meets, you would not have even noticed it existed. No effort was made to market the series and the events were contested before the international program and television coverage began at the meets. I spoke with Libor Charfreitag, the current European Champion, and he felt the event did not get the respect it deserved. “It is actually pretty hard to tell if it was any different from previous years. I would say that overall it was worse … When it comes to each individual meet, we were definitely WORSE OFF … The winner of hammer throw was always the most under-appreciated athlete at the meet! Is this fair? Not only hammer throw was excluded from the Diamond League with no real or persuasive reason, BUT we received no to very little compensation for being kicked out!” [Emphasis added.]

Of anyone, I would think Charfreitag might be happy with the current system. He placed third in the series, entitling him to a $14,000 bonus. Including his prize money from each meet, he earned $19,200 from the series. But, that is barely enough to pay the bills for the season considering the seven meets on the circuit represent virtually the only money making opportunities for a hammer thrower. To put this in perspective, the winner of each Diamond League meet in the discus (or any other event) took home $10,000 and top high jumpers are complaining that this isn’t enough for them to make a living. In addition, being in the Diamond League exposes the athletes to more fans, making them more attractive to sponsors.

But matters get worse. Charfreitag is at the top of the food chain. My training partner Sultana Frizell fared worse this year under the new Hammer Challenge. Despite placing 10th at last year’s world championships and breaking her own Canadian record this May, she was only invited to two of the seven Hammer Challenge competitions. Most of the meets featured the same 4 or 5 top athletes mixed in with some local talent. Anyone outside of that pool had to sit on the sidelines. To make matters worse, the meets were spread out over four continents and six months. The final standings were based on each athlete’s three best results and Sultana still placed 12th with just two meets. However, she wasn’t awarded the twelfth place prize since she did not have the requisite number of meets. This is one of the world’s best athletes, and she barely received any money from this series. In talking with her, she earned more last year under the old system and much of her prize money this year came from a non-Hammer Challenge meet: the Prefontaine Classic. And it all continues to trickle down. Without opportunities at the top meets, Sultana seeks out opportunities at lower paying meets, pushing athletes at my level out of the picture all together.

I asked Libor if he has any suggestions for improving the series and his reply was short and simple: “YES! One and only- make hammer throw part of the Diamond League!!!” He’s right. If the IAAF wanted to support the event, it would have tried to include it in the Diamond League with every other event. In the alternative, they could have created a hammer challenge that at least paid the athletes comparably and highlighted the event. Instead, they did neither and never even gave a reason for their decision.

Libor mentioned to me that if the meets are looking for publicity, records, and fans, the hammer throw is the perfect event. Only one women’s event had a new world record this year: the women’s hammer throw. But rather than being thrown in front of the world, it was thrown at a small meet in Bydgoszcz, Poland. The free publicity that comes with a world record was lost because of this. The women’s hammer is a young event that is ripe for attention, but isn’t even given the opportunity to shine. Hopefully the IAAF and the Diamond League will come to their senses before the hammer throw drifts off into further obscurity and another opportunity is lost for track and field. 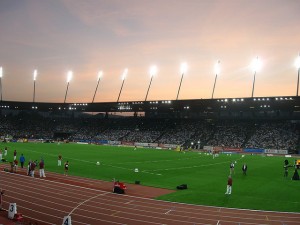 So, to summarize, some athletes win and some lose. And that doesn’t even mention the hammer throw, which was excluded from the series all together. Of greater interest to me, however, is whether the Diamond League met its goal of expanding the brand of athletics. Meeting that goal will help the athletes, coaches, meet directors, and everyone involved in the sport.
END_OF_DOCUMENT_TOKEN_TO_BE_REPLACED

In addition to my comments below, read my thoughts on watching Weltklasse Zürich over at Jesse Squire’s Track and Field Superblog.

Although I’m a track fan and athlete, my interest in athletics goes well beyond spectating and competing. For me, I also love the business side of the sport and am constantly thinking about the challenge of how we can grow athletics. One recent idea that has proved very successful is the shot put’s move outside the stadium at many meets. This has been a classic example of thinking outside the box (and the stadium) that has worked.

How We Got Here
END_OF_DOCUMENT_TOKEN_TO_BE_REPLACED