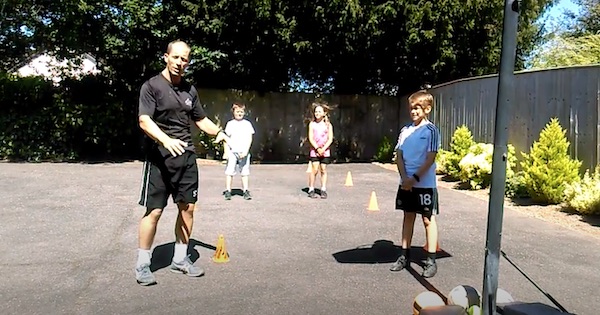 To paraphrase Kelvin Giles, ‘If your coach: athlete ratio is 1:25 then you are managing a crowd, not coaching.’ Some coaches can only dream of that ratio because they regularly manage groups of 40 or 50 people in a session. Coaching large groups presents unique problems. For example, individualization may seem impossible and we have to hope that everyone gets some improvement.

Even when I coach an athlete in 1:1 sessions I question how much individualization of the training program I can do without a supporting staff of data analysts and sports scientists. But coaches can do more than just throw their hands up in the air. There are some things we can do as coaches to help individualize the training program and some things that might be exaggerated. These situations situation simply demands that more creativity to individualize, and also taking time to analyze whether individualization is even required in the first place. I have more questions than answers but I hope to provoke your thinking in this article.

I would suggest that individualization is tailoring your coaching to meet the individual’s needs.

We first need to identify what the needs are. This is easy to write on paper but harder to do in practice. The questions I ask myself are related to:

Each question must also be compared to where they want to be in a certain time frame: a week, a month, a year or four years.

So far, so simple. But gathering the information and turning it into a meaningful programme is difficult. Multiplying that out by 10 or 20 players and we start to lose the thread and resort to more general principles of training that we perceive as ‘truths’.

The doubts in my mind begin with the methods of gathering data and then translating that into a program. In a team sport such as football, players wearing GPS devices is very helpful for providing specific information about total work, top speeds, accelerations and changes of direction. GPS can also be worn in training to replicate/measure the same factors. Twenty years ago, a similar methodology was used with heart rate monitors. The information gathering has improved, but what do we do with it?

The one thing we still don’t know is how a player will respond to the training stimulus that we use. We’re only measuring the stimulus, not the response. So we guess about the response. Quoting research studies that show average improvements of a cohort of subjects that have little resemblance to the athlete in front of you does not make sense to me. The gap between data and individualization widens when we start to use supplementary exercises such as back squats or watt bikes to train footballers. We test and measure the work done in those modes and show ‘improvements’ but then how has that translated to the sport? We have individualized the training, if you don’t think about specificity that doesn’t necessarily mean they’ll improve their play more.

Factors that might change an individual’s response to any training program (and this is what we are after: the response, not the program) include:

It is these external factors that reign in any chance of me ‘guaranteeing’ success with an athlete. There are so many variables that it makes my head spin. Whole industries have arisen and National Governing Bodies have spent millions of pounds creating and supporting the measurer and the gadget-maker of widgets that provide the answers. I don’t have that time or budget and at some point I have to get out and coach.

What can we do to coach the individual?

Looking beyond the physiology for a moment we can get to know the athlete as an individual. For me, this is the first step in individualization. Just as every athlete will respond differently to 5 sets of 5 reps of back squats at 80% 1RM, every athlete responds differently to your coaching style. Some need encouraging and constant feedback. Some respond to a direct coaching cue as if you had insulted their maternal bloodline. Some athletes like being asked questions, some shrivel and blush and feel ‘picked-on’. Some might like the comfort of a group hug pre-match, others hate being touched.

It is the distinguishing and identifying of what works with whom that makes coaching so challenging and interesting for me. We coach humans not excel spreadsheets.

No matter how big your squad, every athlete should be greeted and given an individual acknowledgment at some point. This starts with knowing their names. I remember that eight months after being selected for the England Karate Squad (there were ten of us), the head coach asked me half way through a training session, ‘What’s your name again?’ There was me trying my hardest and then realizing my efforts were undeserving of recognition!

There are assessment tools for gathering information about athletes’ psychological profiles and then adapting your coaching to them. I have used some, but I have always found that the pen and paper adds another barrier between coach and athlete. Conversations still work best for me. I don’t know how to interpret and then act upon 30 sets of profiles. If we delegate that to the sport psychology department, then what are we doing as coaches?

These sessions are far from perfect and there will be times when every gymnast is doing something they don’t like or that is well within their skill set. The choice I have to make when planning and implementing, is to allow at least some portion of the class for their choice, and another part to cover skills gaps that I identify when reviewing the sessions or that they ask for.

It might be possible to tailor your coaching to the individual where the support staff outnumber the athletes. It is hard to do when the coach is outnumbered. As long as the coach is honest and upfront about what is possible and tries to individualize where possible, athletes can be realistic in their expectations and improvements can be made.